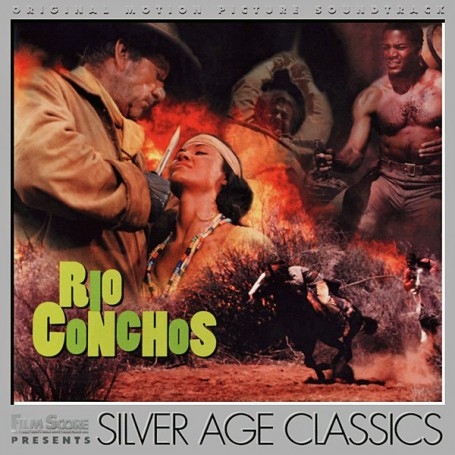 Jerry Goldsmith came into his own as a creator of thrilling western scores with 1964's Rio Conchos, a hard-bitten action story that starred Richard Boone, Stuart Whitman and Tony Franciosa. Rio Conchos was in many ways a reworking of 1961's The Comancheros (FSMCD Vol. 2, No. 6, music by Elmer Bernstein), but it lacked the buoyant presence of John Wayne and told a far darker and more nihilistic tale of social outcasts thrown together on a mission to find a hidden community of Apache gun-runners. It was the dawn of a new breed of grittier, more psychologically honest westerns, and Jerry Goldsmith was the perfect composer to provide these arid and violent tales with a new musical voice.

Goldsmith had already scored several westerns before Rio Conchos, including the acclaimed contemporary western Lonely Are the Brave. But Rio Conchos saw Goldsmith marshaling his skills at writing complex yet melodically vibrant action music, with several early highlights of his musical output contained within. The composer's title music is characteristically spare and folksy, belying the savage intensity of what is to follow, yet his main theme effortlessly forms the backbone for the score's violent set-pieces and provides often soothing commentary on the decency and nobility buried beneath the flinty surfaces of the film's reluctant heroes.

Goldsmith's psychological approach to the action extends to some vicious, Stravinsky-like rhythmic music associated with the Richard Boone character and his violent hatred of the Apache, as well as an alternately exciting and brooding fanfare for the Native Americans. The composer's action music ingeniously plays off both folk-based rhythms (translated to the powerful forces of the full orchestra) and Spanish influences as the action travels South of the Border.

The existing CD of Rio Conchos is a re-recording conducted by the composer for Intrada Records in 1988. FSM's new release features the original soundtrack—never before released—as recorded for the film at 20th Century Fox in 1964. The recording is complete, in chronological order, and in excellent mono sound with eleven cues not included on the Intrada CD, including a great deal of moody, flamenco-based material for Tony Franciosa's character and a lengthy, bravura action cue ("Drag Race") written almost exclusively for percussion. Bonus tracks include a seldom-heard vocal version of the title theme and five tracks of score remixed in stereo, focusing on the action-packed climax.