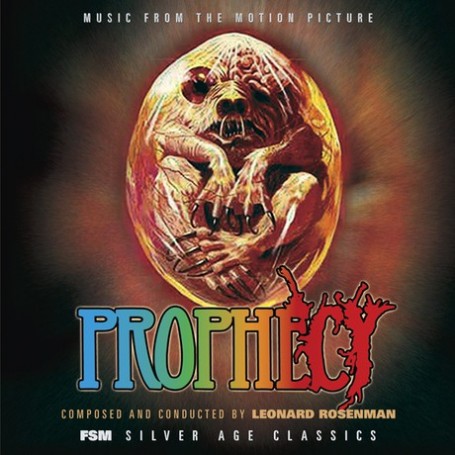 One of the most-requested scores from the Paramount Pictures vaults comes to CD in complete form: Prophecy, Leonard Rosenman’s action-oriented horror score from the 1979 John Frankheimer ecologically minded monster movie.

Prophecy was a large-scale attempt to bring the monster genre up-to-date with modern special effects, giving a first-rate filmmaker the tools do so. The story concerns mercury poisoning that is mutating wildlife in a remote area of Maine—resulting in a marauding bear that somewhat resembles a giant baby, a pepperoni pizza and a herpe. Robert Foxworth stars as an EPA agent assigned to investigate, with Talia Shire his pregnant wife; Armand Assante plays a local Native American and Richard Dysart a representative of the polluting paper mill.

While Prophecy was financially successful, its earnest combination of serious ecological themes and outrageous monster action has made it more of a cult classic than anything else. One of the film’s finest attributes is its honking good symphonic score by Leonard Rosenman, who had recently scored the 1978 animated version of The Lord of the Rings.

The fiercely modern and individual Rosenman possessed an adventuresome symphonic style (and breathtaking technique) which was well-suited for sci-fi and fantasy films such as Fantastic Voyage, two of the Planet of the Apes sequels and supernatural thrillers like Race With the Devil and The Car. In Prophecy, his pulse-pounding score combines pastoral, expansive moments (for the gorgeous Maine scenery), intimate human-interest scoring, chilling suspense and (last but not least) throbbing, over-the-top monster action, embellished by the spine-chilling twangs of Craig Huxley’s electronic blaster beam.

Over three decades after its creation, Rosenman’s complete score to Prophecy comes to CD in complete form from first-generation stereo mixes made at the time of the recording. Liner notes are by Scott Bettencourt and Alexander Kaplan.