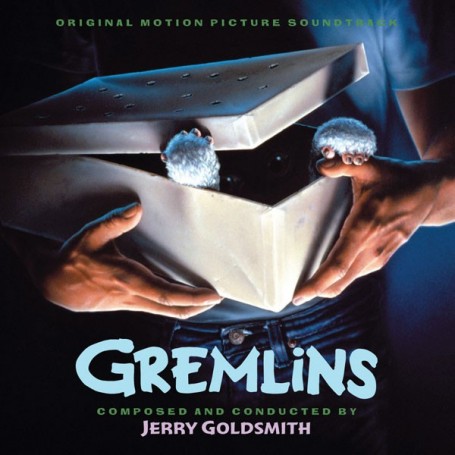 Chris Columbus was a fledgling writer when Steven Spielberg optioned his screenplay about little creatures terrorizing small-town America. By the time Amblin Productions filmed Gremlins in 1984, Spielberg and director Joe Dante had transformed the straightforward horror film into something far more comic, while retaining some memorable Grand Guignol moments. A combination of cuddliness, edgy comedy and shocking violence turned the film into a sensation, rendering it one of the biggest hits of the year.

A key element in the film’s success was the imaginative meld of traditional orchestral writing and cutting-edge electronics provided by frequent Joe Dante collaborator Jerry Goldsmith. The music for Gremlins is a fan favorite that has long been recognized as one of Goldsmith’s most original works. Most of it has never been available in a legitimate release—until now.

At the center of the score is a ragtime theme played on synthesizer—a raucous celebration of mayhem that harkens back to the early days of animation yet gives the music a funky, contemporary twist.
This is balanced by a heart-warming lyrical theme for the endearing mogwai character, Gizmo (which doubles as a love theme for the young couple portrayed by Zach Galligan and Phoebe Cates). An off-kilter waltz theme for Polly Holliday’s modern-day equivalent of the Wicked Witch of the West may be Goldsmith’s most outrageous comic confection. Solo fiddle invokes the devil (as in Herrmann’s The Devil and Daniel Webster), eerie bells (both acoustic and electronic) invoke the mystery of the mogwai, and pulse-pounding action music aptly supports the wild physical antics of the destructive creatures.

Disc one of this 2CD set features the premiere release of the complete score for Gremlins, mastered from the original PCM live stereo mixes by Bruce Botnick, supervising engineer of the original recording sessions. Disc two features a recreation of the 1984 soundtrack album, billed as a “Specially Priced 7-Cut Mini Album” with three pop songs on side one and a 16:12 suite from Goldsmith’s score on side two.

FSM’s 28-page booklet includes a reminiscence from audio engineer Botnick as well as a detailed essay on film and score by Jeff Bond and Mike Matessino (incorporating comments from an interview with director Dante).

Fans of Goldsmith and Gremlins are urged to purchase these CDs immediately, but be warned: Do not get the discs wet and absolutely never play them after midnight!