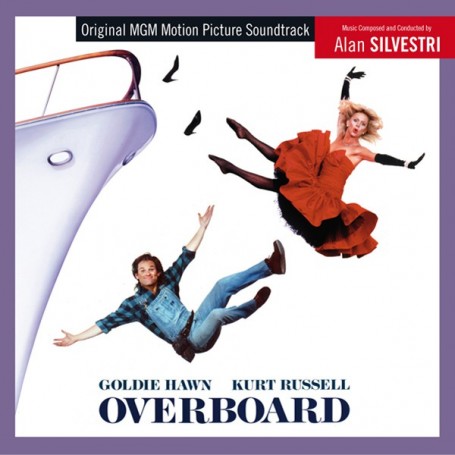 Overboard is a 1987 romantic comedy film starring the star couple Goldie Hawn and Kurt Russell. The film was directed by Garry Marshall (Young Doctors In Love, Pretty Woman and The Princess Diaries) and produced by co-actor Roddy McDowall.

Music Box Records is proud to announce for the first time available on CD the world premiere release of acclaimed composer Alan Silvestri's (Back to the future, Who framed Roger Rabbit, Captain America) score which has been remixed in stereo from the original session masters courtesy of the MGM archives.

Alan Silvestri was taking his first complete plunge into the real-life romance about amnesia turn bitchy socialite Joanna Stayton (Goldie Haw) into “Annie“, an instant wife and mother for the rough-edged, widowed carpenter Dean Proffitt (Kurt Russell) and his four out-of-control kids. Not only would Silvestri’s music skillfully follow characters Joanna and Dean from their first slapstick battles to their climactically soaring heartstrings, but Overboard’s score would also mark the transition of his sound from energetic, electronic rhythms to the lush orchestral writing that defines his music today. His thematically-driven early works often distinguished themselves by incorporating both approaches, a bouncy, yet emotional Synclavier and symphonic energy that particularly befitted such comedies as Critical Condition, Summer Rental and Outrageous Fortune.