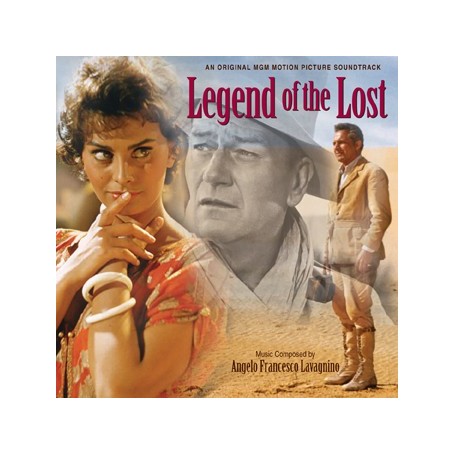 LEGEND OF THE LOST

Legend Of The Lost was produced by John Wayne’s Batjac Productions, and starred the Duke and Rosanno Brazzi as the two men. The dame was Sophia Loren, and the fourth character was the Sahara desert. It’s an odd film, both intimate (basically a three-character drama) and epic (the Sahara) – a tale of treasure, lust, and sand, not necessarily in that order. Wayne plays a guide in hock up to his ears to the police captain in Timbuktu, Loren plays a woman who has been known to pick pockets and pick up men, and Brazzi plays a man in search of his long-lost father, who, in search of a Lost City has presumably perished in the desert. Oh, and the treasure – there’s always the treasure – that the long-lost father was in search of. It’s actually a very entertaining film, with Duke his usual heroic self, Loren looking luscious whether traipsing in the sand or bathing by moonlight, and Brazzi feeling tortured and tormented. Henry Hathaway, with whom Wayne did many films, directed, and the film was gorgeously photographed by the brilliant Jack Cardiff in Technirama and Technicolor.

The score was by Italy’s Angelo Francesco Lavagnino. Lavagnino was one of Italy’s finest film composers and certainly one of its most prolific, beginning his career in 1948. His voice was unique – one could always tell a Lavagnino score immediately. His music is exotic and melodic and unique. Some of his best work includes the films The Naked Maja, The Last Days of Pompeii, The Colossus of Rhodes, Esther and the King, Imperial Venus, Orson Welles’ Chimes at Midnight, and tons of sword-and-sandal films, Italian sci-fi, and spaghetti westerns. Standing tall among his scores is Legend Of The Lost. His music for the film is dreamy, mysterious, romantic, and captures the moods of the nights and days of the desert almost like a tone poem. You can feel the heat beating down in the music, feel the shifting of the sands, feel the passion of two men in love with the same woman – Lavagnino’s melodies are sinuous and sensual.

The tapes for Legend Of The Lost are long lost but thankfully about thirty-two of the film’s forty minutes of music was found in Italy and it is those thirty-two minutes we present here. Even though we’d love to say it’s the complete score, we figured thirty-two minutes is better than no minutes, especially of primo Lavagnino. Missing were the film’s main title, which we’ve taken from the DVD, and even though we had the film’s final cue in its entirety it was missing the choral overlay, so we’ve included a bit of that, also from the DVD. Sound is in clean, crisp mono.