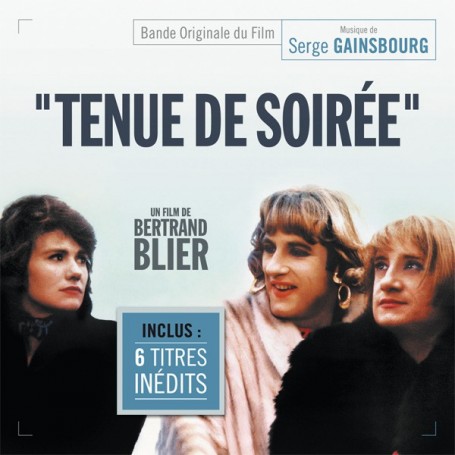 Preceded by its explosive reputation, Tenue de soirée (Ménage) was one of the greatest successes of 1986 and one of the most celebrated films of its creator, Bertrand Blier. A kind of follow-up to the film Les Valseuses (Going Places), which had come out twelve years earlier, the film recounts the story of a zany and carefree trio, brought to life by Gérard Depardieu, Miou-Miou and Michel Blanc. A light-hearted romp ensues which is both melodramatic and burlesque, in which both sodomy and transvestites feature in the forefront. Just as in Les Valseuses, Blier plays here the provocation card, but with a more bitter tone, based on themes of crisis and of AIDS.

As Bertrand Blier, interviewed for this new expanded edition, recognizes himself, there was an obvious meeting between the film subject and the composer. ''It was quite clear we shared a common culture, that of tongue-in-cheek homosexuality, à la Jean Genet'', recalls the director of Buffet Froid. At that time, Gainsbourg had just released his album Love on The Beat with ''that famous CD cover designed by William Klein, showing Serge as a transvestite. This cover - and more generally the whole homosexual theme of the album - no doubt unconsciously influenced me in my decision to call upon him again'', he explains.
Filled with all these quite intimate musical pieces, at once gentle and painful, played by Gainsbourg himself on a Yamaha keyboard, the score for Tenue de soirée is a very surprising mixture of melancholic themes in contrast with the harshness of some scenes in the film. They express what Blier tends to hide with comedy dialogue: the deep pain of the characters, their unease, their doubts. But this edition also presents some dynamic dance pieces, especially for the night club scene. It should also be noted that he reworked certain of his favourite melodies of the film for his daughter Charlotte’s first album.