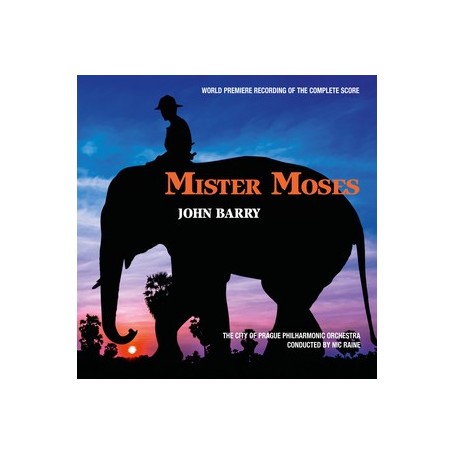 Prometheus Records and Tadlow Music proudly present a Special Collectors Edition featuring an early film score from the legendary composer of Dances With Wolves and Out of Africa: John Barry’s Mister Moses. The 1965 film starring Robert Mitchum, Carroll Baker and Ian Bannen told the story of a latter-day Mister (Joe) Moses who is chased out of an African village only to be found in the bulrushes downriver by a beautiful missionary’s daughter. When he undertakes to lead the natives to safety (a new dam will soon drown their village), her initial dislike of him turns to romance. Barry’s music builds on the African rhythms and colors he had already established in Zulu and Born Free. Among the highlights is a delightful theme for the elephant Emily.
No soundtrack recording of Mister Moses was ever released, and the original studio masters are now lost. Barry’s score was reconstructed for this recording by Nic Raine, who—as a principal orchestrator for John Barry on numerous films and albums—knows the composer’s style intimately. Raine conducts the 75-piece City of Prague Philharmonic Orchestra in this new recording, produced by James Fitzpatrick and recorded at Prague’s Smecky Studios in stunning and dynamic digital sound. The full score is augmented by the inclusion of a brief but delightful concert suite, newly recorded for this release. The 16-page booklet includes informative sleeve notes by Frank K. DeWald and information on the recording by producer Fitzpatrick.