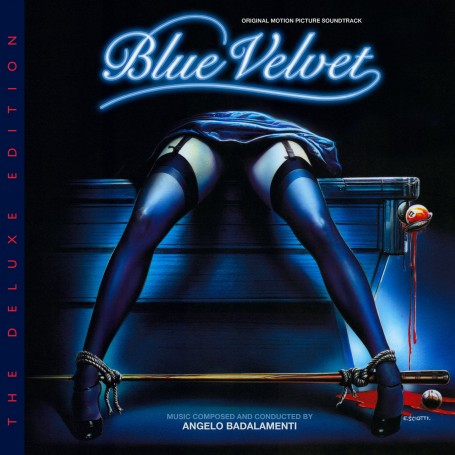 Blue Velvet is David Lynch’s unforgettable 1986 masterwork, starring Kyle MacLachlan as a college student whose discovery of a severed ear leads him into a nightmarish world of crime and sexual perversion. Isabella Rosselini, as a tormented lounge singer, and Dennis Hopper, as an emotional gas-sniffing psychopath, are among the brilliant cast.

Blue Velvet was Lynch’s first collaboration with his longtime composer and musical partner, Angelo Badalamenti (their fame later to explode with Twin Peaks). Badalamenti has always been able to channel Lynch’s unique vision, and it was evident upon their first collaboration: a dark, moody yet melodic score, at turns agitated and violent, soaring with sublime beauty, and hanging cool with ’50s-style jazz. Badalamenti also acted as musical director for the film’s nightclub lounge recordings (in fact, the reason why he was hired).

Varèse Sarabande released the Blue Velvet soundtrack at the time of the film, a program of songs and score retained as disc one of this 2CD set—with the addition of the famous 1963 recording of “Blue Velvet,” performed by Bobby Vinton. Disc one concludes with the first Lynch–Badalamenti–Julee Cruise collaboration, the dreamlike “Mysteries of Love.”

Premiering on disc two is an extended program of previously unreleased Badalamenti score: film cues, alternates and outtakes entitled “Lumberton Firewood.” Although Blue Velvet was scored more traditionally than later Lynch projects, the director and composer intended many tracks to be merely “firewood,” their term for raw orchestral sonorities to be edited and manipulated into sound design by the director.