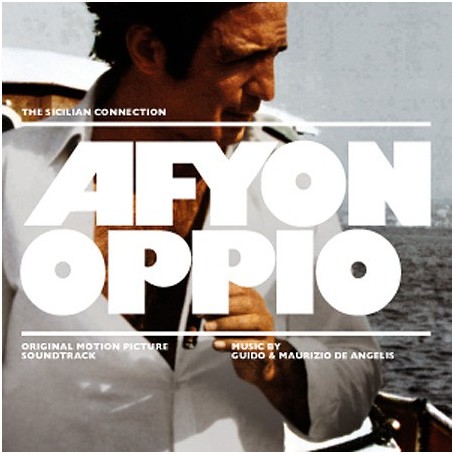 This 1972 Italian crime film starred Ben Gazzara (RUN FOR YOUR LIFE, ANATOMY OF A MURDER, THE BRIDGE AT REMAGEN, QBVII, INCHON, ROAD HOUSE) as an American underworld up-and-comer who relocates to Europe and immerses himself in the dangerous and mysterious world of heroin production.

The dynamic score is by the legendary duo of Guido and Maurizio De Angelis. The brothers are renowned for their highly distinctive and fan-pleasing style, which usually features ethnic-infused melodies and energetic, infectious ballads. Any listing of some of their most famous soundtracks is likely to include SANDOKAN, TRINITY IS STILL MY NAME, KEOMA, ROMA VIOLENTA and MANNAJA (A MAN CALLED BLADE).
This time out they have generated a score that covers all the bases; along with two lovely Sicilian-styled tone poems there is also included a life-affirming main title vocal (in the charismatic Oliver Onions modality) with numerous and captivating variations of this theme, sophisticated jazz and rock tinged lounge instrumentals (that are sure to satisfy all lovers of silver age scoring), plus a gorgeous love theme that pays homage to the beauty of actress Sylvia Monti. This most current recording presents a pristine digital remastering of the original LP release, all 12 tracks including the two bonus cuts (music not used in the film).

As with all previous Chris' Soundtrack Corner productions this release is available with two types of packaging: one featuring a unique jewel case, the other has an attractive foil inlay. Both editions come with a 12 page booklet with full color art and liner notes by Euro-soundtrack specialist John Bender.