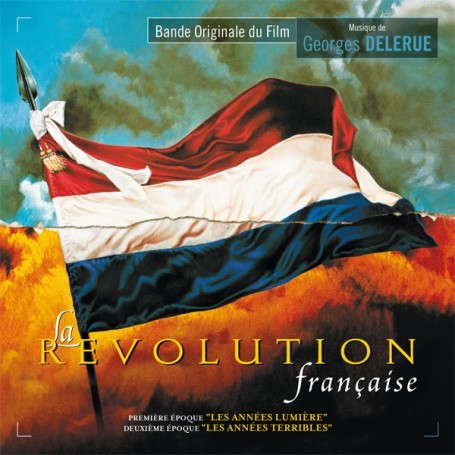 Newly remastered and expanded edition.
More than 2 hours of music, including 30 minutes of music never released before.
A full-color 16-page CD booklet with French and English liner notes by Gergely Hubai.

In collaboration with TF1 Droits Audiovisuels and Colette Delerue, Music Box Records presents the epic Georges Delerue score La Révolution Francaise (The French Revolution). Shown in two parts upon its original release (The Light Years and The Terrible Years), this film by Robert Enrico and Richard T. Heffron was made for the 200th anniversary of the Revolution and detailed the history of the conflict in six hours with an international cast such as Jean-François Balmer, Jane Seymour, Andrzej Seweryn, Klaus Maria Brandauer, Sam Neill, Claudia Cardinale, Peter Ustinov, François Cluzet et Christopher Lee! The film spans one of the longest and most complex scores by Georges Delerue. The colorful tapestry of the 20+ year history allowed the composer to create one of his most evocative scores ranging from his best-known romantic side to lush period pieces, choral majesty and disturbing strings suspense for the fall of Robespierre and friends.

The score is given a new, expanded release, including the full program of the original Polydor soundtracks with several bonuses. The new 2-CD not only improves the sound and contains over 35 minutes of previously unreleased music from the composer's archives, but also corrects the incorrectly reversed stereo channels of the original Polydor release. Even if you own the original LPs or the now out-of-print CD re-issue, the new release brings something new in all departments.

This deluxe limited 25th anniversary collector's edition is the most ambitious release of the label up to this point. The CD comes in a slipcase which also includes a 16-page full-color booklet with bilingual (French and English) liner notes by Gergely Hubai. The release is limited to 1500 units.