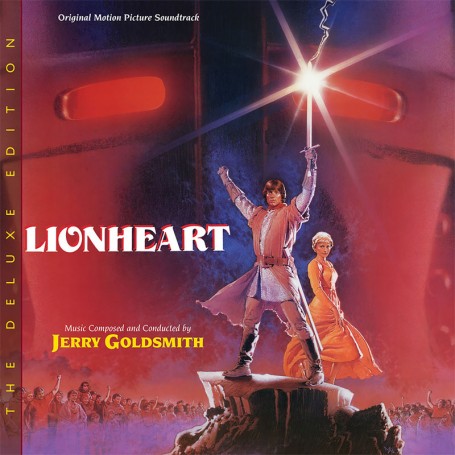 Jerry Goldsmith reinvented himself numerous times over his storied career, but one of his most popular periods was for the 1980s wave of large-scale symphonic scores. Lionheart (1987) came at the crest of this glorious period, and saw his rousing symphonic style—with glorious melodies, dazzling orchestrations, and synthesized embellishments—tackle a young-adult adventure in the Crusades.

Lionheart marked Goldsmith’s final collaboration with his friend and most prolific director collaborator, Franklin Schaffner (Planet of the Apes, Patton, Islands in the Stream). The film starred Eric Stoltz as the leader of a Children’s Crusade of orphans against Gabriel Byrne as an evil Black Prince. Little-seen today, the project is perhaps best-known for Goldsmith’s magnificent score, which he recorded with the Hungarian State Symphony Orchestra; its stirring, noble main theme made its way into Goldsmith’s concert repertoire.

Varèse Sarabande’s album producers in 1987 adored the Lionheart score so much that they released not one but two volumes of vinyl LPs. Most, but not all, of the tracks were released on a single CD compilation in 1994. Now, this 2CD Deluxe Edition presents the complete contents of both LPs, in film sequence, and adds two additional, previously unreleased cues. Because the new cues are sourced from reference material, they are labeled as “bonus tracks” at the end of a shorter-than-expected disc one, so as to remain in chronological order. The new liner notes are by Tim Greiving.