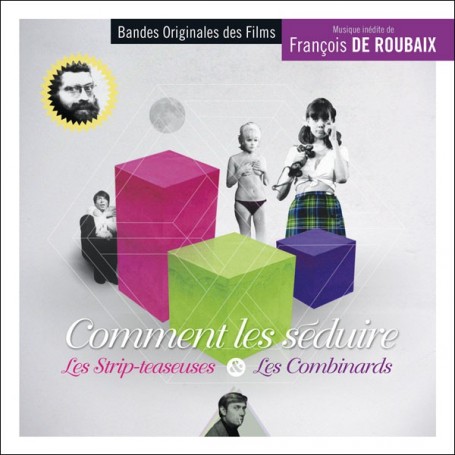 Music Box Records pays tribute to François de Roubaix with three original motion picture soundtracks composed for Jean-Claude Roy's films: Les Strip-teaseuses (1964), Les Combinards (1965) and Comment les séduire (1001 Ways to Love,1967). Never released to this day under any kind of form, these scores are now available for the very first time on a CD gathering over one hour of music. Mixing jazzy and bucolic tones, François de Roubaix created catchy tunes sustained by an orchestration as sophisticated and fresh as ever.

From the very beginning of his career, François de Roubaix displayed an obvious talent for melodies. Instinctively, the composer always selected the instrument which most perfectly fit them. Influenced by Django Reinhardt's virtuoso elegance, his practice of jazz made him emerge as a gifted improviser which added a good deal to his inspiration. Obviously his favorite instruments were the guitar and trombone, but he was also particularly fond of the flute and harmonica. Throughout the sixties, he often used an enforcing electric guitar in reference to James Bond's world. The piano was also prevailing in his music. It allowed him to express a large variety of feelings. As he worked very fast, François de Roubaix was able to compose dramatic themes as well as to offer numerous rhythmic variations out of a dance and to capture the essence of a folklore. Whether he worked for a commercial or an institutional short movie or a major feature film, he felt equally involved. He would not deliver less than an outstanding performance, most of the time for a moderate budget. Which appealed to a great number of filmmakers, either friends or admirers, all of them were thrilled by the result. One of them was Jean-Claude Roy who has always been cherishing delighted memories out of his complicity with this always efficient and enthusiastic musician. These three unreleased movie soundtracks demonstrate that his unique talent for melodies never failed.

During the mastering sessions, we tried to improve the sound quality of the original master tapes but there are still some perceptible defects on some cues.

“All three of these scores were written for small ensembles and effectively managed to create the right textures and ambiance.The melodies are fresh, enjoyable and succeed in creating a nice ambiance. If you enjoy eclectic small ensemble scores that feature jazz, nightclub music and avant garde writing, I invite you to purchase this wonderful compilation.” (Craig Lysy, Movie Music UK)