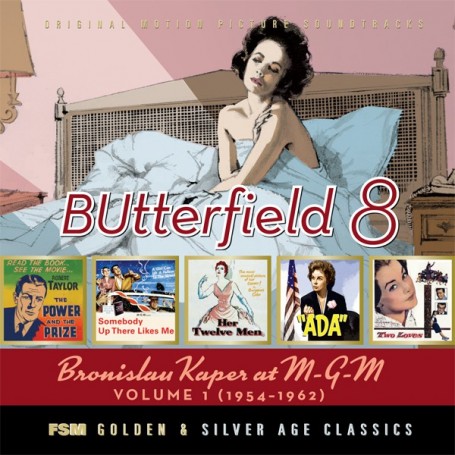 Bronislau Kaper’s phenomenal versatility made him an ideal choice for a variety of film genres during his two and a half decades of work at M-G-M. Much of his output has already been explored by previous FSM releases, but this limited-edition, six-film 3CD set (limited to 1,200 copies) fills in some important gaps in the Kaper discography.

Disc One includes three scores from the 1950s, each a model of economy distinguished by Kaper’s melodic gift and unerring dramatic skill. The Power and the Prize (1956) was a contemporary fable about corporate greed, but its music focuses on a lush and florid romantic theme that is subjected to variations throughout the film. Her Twelve Men (1954) was a sort of female Goodbye, Mr. Chips, and it mines a more sentimental vein, centered on a school song that Kaper effortlessly blends into his underscore. Somebody Up There Likes Me (1956, conducted by Miklós Rózsa) was based on the autobiography of prizefighter Rocky Graziano; it includes a few cues of urban-tinged symphonic jazz (à la Leonard Bernstein’s On the Waterfront) plus developments of its hymn-like title song.

Disc Two features two scores Kaper wrote just prior to Mutiny on the Bounty(FSM Vol. 7, No. 16): Ada and Two Loves (both 1961). Although the films are largely forgotten today, Kaper contributed a dramatic and sensitive score to each, characterized by his penchant for effective understatement. The music is pithy, not epic—and often brooding. Much of Ada (a melodramatic tale of political corruption in the South) is especially somber, painted in dark orchestral colors (low strings, clarinet, English horn); Two Loves (which featured Shirley MacLaine as an expatriate American in a complicated romantic triangle) is leavened by more expansive writing which reflects the Northern New Zealand setting. These scores also demonstrate Kaper’s skill in weaving music by others into the fabric of his own; Ada makes use of a gospel number (“May the Lord Bless You Real Good”) and Two Loves incorporates one of Liszt’s Transcendental Etudes for piano.

The final disc is devoted to one of Kaper’s most-requested titles: the hard-hitting contemporary drama, BUtterfield 8 (1960). The score, while traditionally symphonic, is suffused with an undertone of jazz that reflects the sultry, Oscar-winning performance by Elizabeth Taylor as a sophisticated “escort” who wants desperately to find true love. From its extraordinary opening sequence (nearly nine minutes of music virtually uninterrupted by dialogue) to its tragic dénouement, Kaper’s sophisticated music brings operatic depth to the film’s turbulent emotions. Its saxophone-driven main theme is one of the most popular tunes by this master melodist; it is known to fans in countless cover versions, but the original soundtrack has never been available—until now.

This compilation includes the complete orchestral scores for all six films (two vocals are not included due to licensing restrictions) and, as always, numerous bonus tracks—including a spill-over from FSM’s Mutiny on the Bounty. All but Somebody Up There Likes Me are presented in stereo. The booklet, designed by Joe Sikoryak, includes concise background information on the films and their music by Frank K. DeWald, plus track lists, film stills and posters. More extensive essays and full track-by-track commentaries in the finest FSM tradition are available online.