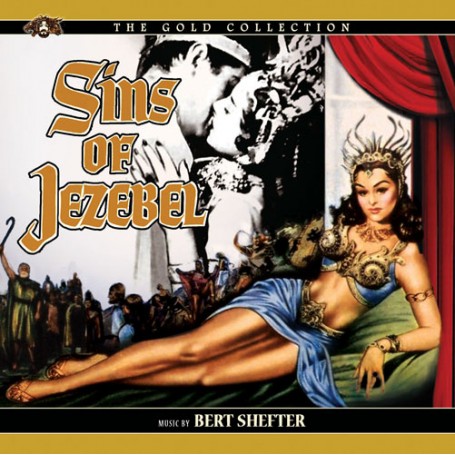 A new decade is on and what better way to start a new decade than a gorgeous soundtrack from the GOLDEN AGE of cinema. The grand opener for 2020 for Kronos Records is none less than Reginald Le Borg's SINS OF JEZEBEL from 1953, the film about the biblical story of King Ahab (Eduard Franz) and Jezebel (Paulette Goddard), his young bride to be, whos name became eponymous of wickedness and shamelessnes. The film was also knows as IL RE D'ISRAELE (THE KING OF ISRAEL).

This truly epic soundtrack was composed and conducted by BERT SHEFTER, whom many of us usually known as cowordking with PAUL SAWTELL. This was one of his earlier , solo ventures and one of his grandest if not the grandest works. This is the first time ever that the soundtrack of this 1953 epic has a release in any format, almost 70 years after the film release! The music composed by Shefter is big, epic and very rich in melodic content and despite the only known surviving sources did not run very long, the majority of the important music heard in the film is there for the world to finally listen to in all its glory.

The CD is a limted edition of 500 copies