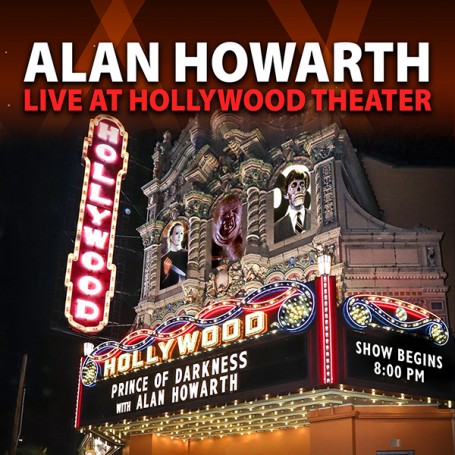 The week before Halloween 2014, composer Alan Howarth presented a live show of his film music in Portland, Oregon. It was a kind of pinnacle of Howarth’s nearly forty years of music and sound design for motion pictures that began with creating sound effects for STAR TREK: THE MOTION PICTURE in 1979, found him co-composing the music for a number of director/composer John Carpenter’s films, and moving on to have a successful career scoring films up into the current day.

The music on this album comes from that 2014 concert, held at the historic Hollywood Theater in Portland, Oregon. Howarth recorded the show using a board mix [allowing the live sound to be mixed in real time during the performance], with a digital tape recorder placed on the stage to record the live audience ambiance, which was added to the final mix. The vinyl album of that concert was initially issued on the Wyrd War label in 2018, with a pressing of 500 copies that sold out quickly. BSX Records is now pleased to present and preserve this concert for the first time on CD as we celebrate the music of Alan Howarth Live!

Howarth had taken his music on the road for the first time in 2008, when he was invited to participate in a Q&A session at the HALLOWEEN “30 Years of Terror” convention, held at the Pasadena Convention Center. Rather than talking about the music, Howarth played it live, using the Logic digital audio workstation software application on his laptop along with a MIDI (Musical Instrument Digital Interface) keyboard. The event was a success and as a result Howarth wound up developing a full concert of his music for a show in Kraków, Poland in 2010. He met an Australian video artist named Jade Boyd, and she created unique video artistry based on the films which was projected during subsequent concerts. Since then, he’s had sold-out shows at such venues as the 2011 Unsound Festival in New York City and Synthplex in Burbank, California, and returned to Europe for concerts in Geneva, St. Petersburg, Toronto, London, and Paris.

ALAN HOWARTH LIVE AT HOLLYWOOD THEATER is a limited edition release of 500.