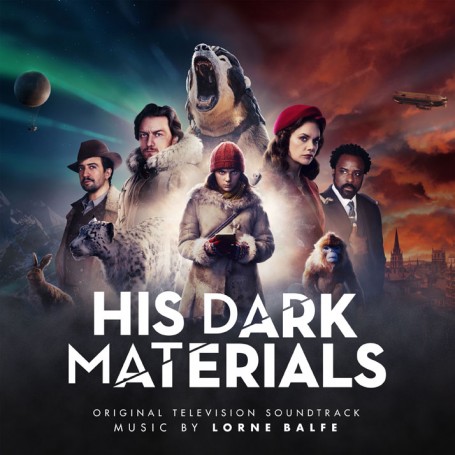 Award-winning composer Lorne Balfe’s dramatic soundtrack to the BBC’s adaptation of Philip Pullman’s fantasy trilogy.  The main themes from His Dark Materials have already been introduced to listeners through The Musical Anthology of His Dark Materials, released on Silva Screen Records in November 2019. For this concept album the principal themes were reworked, moulded and explored as each character’s theme is on a separate musical journey throughout the series. The themes are never fixed, there are no rules and they are constantly evolving. His Dark Materials original score provides a musical narrative drive across all eight episodes. The album presents the music, including main character themes, as they appear through the series.
Lorne Balfe (Mission Impossible: Fallout, The Lego Batman Movie, Churchill) is a Grammy Award winning, EMMY and BAFTA nominated composer. Whether on an impossible mission, the heartbreak of the Queen, the perils of the cape crusade or the soul of a genius, Lorne Balfe creates a musical voice that reflects the characters and the stories that embody them. Originally from Inverness, Scotland, Balfe has created music in virtually all genres and for all visual media with projects ranging from major studio to independent films, tentpole video game franchises, beloved animated feature films, critically acclaimed television series, and documentary features.

CD1:
1 Iorek's Armour
2 The Great Flood
3 Lyra's Jordan
4 Everyone is Special
5 The Golden Compass
6 Where Is Roger?
7 Readying the Boats
8 Leaving Jordan
9 Tell Me Where He Is
10 Voyages
11 Cocktail Party
12 I Will Succeed
13 There Was a Gyptian Nurse
14 Daemons to Dust
15 Clear Your Mind
16 The List
17 Look to the Stars

CD2:
1 Gateway to the North
2 You Loved a Witch
3 Iorek Breaks Loose
4 Some Sort of Ghost
5 Polar Adventure
6 The Silver Guillotine
7 Battle of Bolvangar
8 Parting Ways
9 Armoured Claws
10 Assuming The Mantle
11 Airships Approaching
12 Fog and Ice
13 Bridge to the Stars
14 The End of the Magisterium
15 Crossing Worlds
16 Into The Sky