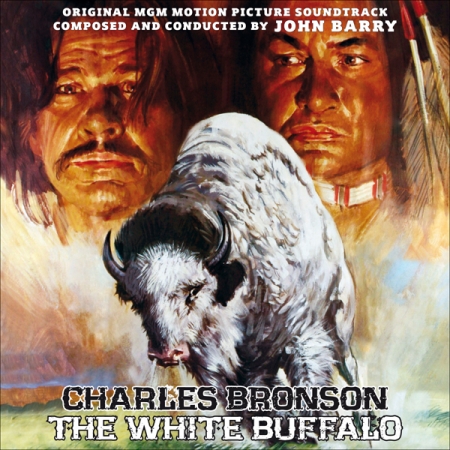 Quartet Records and MGM happily present a newly restored and remastered edition of John Barry’s unusual score (plus David Shire’s unused music) for The White Buffalo (1977). This bizarre western variation of Melville’s Moby Dick was directed by J. Lee Thompson, produced by Dino De Laurentiis, and starred Charles Bronson, Jack Warden and Kim Novak. John Barry (Goldfinger, The Ipcress File, The Last Valley, Out of Africa) composed a surprisingly dark, dissonant and avantgarde score for The White Buffalo that, although it includes some examples of his romantic, bittersweet sound, is fascinatingly aggressive. Barry was hired to score the film after the filmmakers rejected the initial score composed by David Shire. (Barry had scored King Kong for De Laurentiis one year earlier, and the two scores have many similarities, especially in the tribal orchestrations.) Discovering the rejected score by David Shire (The Conversation, All the President’s Men, Return to Oz) has been a wonderful surprise. Shire provided a more melodic and thematically varied score than Barry (although the latter’s grim tones were more what the producer and director wanted). Shire’s music for this film sometimes evokes Stravinsky, using the same serialist technique he used for The Taking of Pelham One, Two, Three. It would have given the film a more contemporary point of view, especially with its use of a band consisting of bass, guitar and drum kit. Prometheus Records released Barry’s soundtrack for The White Buffalo—taken from the mono music stem (the only available source since the original recording sessions have been either lost or destroyed)—almost fifteen years ago. For this new release, we have transferred a different mono stem—one that is in much better shape and which includes some brief passages from one reel not included on the Prometheus. Also, all dialog bleed has been successfully removed. The Shire score (also in mono—as it was recorded) comes from a personal copy generously provided by the composer. Thoroughly restored and expertly mastered by wizard engineer Chris Malone, the John Barry score returns in much improved and complete form, while David Shire’s music can finally be heard—at last! The liner notes by film music journalist Tim Greiving include quotes from a new interview with Mr. Shire. The white earthquake is here!