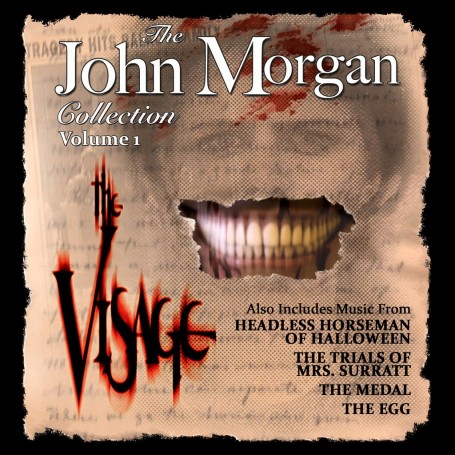 Dragon’s Domain Records presents THE JOHN MORGAN COLLECTION, VOLUME 1, featuring world premiere releases of music from several projects the composer has been involved with across his career.

John Morgan is best known as a leading reconstructionist of vintage film scores, in partnership with composer/conductor William T. Stromberg. With Morgan’s expertise in transcription and orchestration and Stromberg’s capability as a conductor, the pair have been involved in restoring significant film scores for new recordings, allowing rare historic and artistic film music in many genres to be recorded and released, many in complete form, for the first time.

THE JOHN MORGAN COLLECTION, VOLUME 1 gathers together a number of Morgan’s lesser-known, independent short film scores, and one score for an audio play broadcast on radio. The scores demonstrate Morgan’s affinity to the form and style of classic film music and on their own contain some remarkable music which we are pleased to share.

THE VISAGE tells the story of a young man watches over the dead body of a spiritualist for three intense nights, gradually piecing together a history that leads the dead man’s family to madness. THE VISAGE stars Chris Ayles, Sylvester Janey, and Ralph Miller and was directed by Kirk Henderson, then best known as a storyboard artist and animator. Henderson wrote the script as a modernization of Russian author Nikolai Gogol’s story “The Viy.” The score was performed by a 60 piece orchestra, conducted by William Stromberg while the pair were in Moscow recording music for one of their restoration projects.

Released in 1996, THE MACABRE PAIR OF SHORTS is an anthology of comic horror tales that follows a pair of snobby vampires, an English teacher with such an unhealthy obsession with The Legend of Sleepy Hollow that he might lose his head over it, a psychotic mime with a violent sales pitch for eggs & ham, and a killer reel of film that erases everyone who watches it. THE MACABRE PAIR OF SHORTS was directed and co-written by Scott Mabbutt, partially based on the short film “Overtime” by King Wilder, and co-written and produced by Sean Manton.

Airing in 1982, THE TRIALS OF MRS. SURRATT was an audio play written by Lanie Robertson and adapted and directed by filmmaker Nicholas Meyer (STAR TREK II, TIME AFTER TIME, THE DAY AFTER) for National Public Radio (NPR). The play starred Piper Laurie, Richard Jordon, John Randolph, John Considine, and David Warner as John Wilkes Booth, and was recorded in Los Angeles by radio station WHA. Mary Surratt was convicted of taking part in the assassination of President Lincoln and sentenced to death. Surratt was officially the first woman tried by military tribunal and executed by the United States Government. Numerous historians debate the significance of her role in the conspiracy.

Released in 1992, THE MEDAL was Directed by Andrew DeCristofaro, better known as an Oscar-nominated sound editor [for the 2014 film UNBROKEN] who also worked on IRON MAN 3 (2013) and GREEN BOOK (2018). THE MEDAL tells the story of Ed Ryan, who after burying his wife, looks through some of their family things and comes across an old military medal that stirs up nostalgic memories. As a suburban youth back in 1959, lonely and bullied Eddie Ryan befriended an elderly man named William Peters. Mr. Peters gave him the medal, which he’d received in wartime for courage and bravery. The next time Eddie came to visit Mr. Peters, he learns the old man has passed away. Segueing to the present day, Ed regards the medal and feels he will have the courage to carry on without his wife.

John Morgan is a film composer based in Los Angeles, California. After receiving his Masters Degree in Music at San Diego State University, and studying composition with David Ward-Steinman, he stayed on at the University and taught orchestration, music theory and various film music courses.

In the late 70s, Morgan moved to the Los Angeles area and secured work orchestrating for such composers as Fred Steiner, Bruce Broughton and Alex North. In 1979, Morgan composed and orchestrated his first feature film score and in the ensuing years composed music for more than 30 feature films, as well as many television, radio and cable projects including STARSHIP TROOPERS 2, TRINITY AND BEYOND, RAY HARRYHAUSEN – THE EARLY YEARS, CINERAMA ADVENTURE, DEMON IN THE BOTTLE, TINY TOON ADVENTURES and others, many in collaboration with his music partner and life-long friend, William Stromberg.

Morgan's love and passion for the great scores of Hollywood's golden age has led him to the arena of arranging and reconstructing many classic scores for new recordings. He has embarked on a long series of film music recordings for Marco Polo (Naxos), BMG Classics his own label with Anna Bonn and William Stromberg, TRIBUTE FILM CLASSICS.

Among the scores he has reconstructed and orchestrated for new recordings are: Max Steiner's THE CHARGE OF THE LIGHT BRIGADE, KING KONG; Erich Wolfgang Korngold's CAPTAIN BLOOD, ESCAPE ME NEVER, THE ADVENTURES OF ROBIN HOOD, THE SEA HAWK; Roy Webb's scores for the Val Lewton films, Hans Salter and Frank Skinner's THE WOLF MAN, HOUSE OF FRANKENSTEIN, ABBOTT AND COSTELLO MEET FRANKENSTEIN as well as scores by Hugo Friedhofer and Victor Young.

Dragon’s Domain Records is excited to present the world premiere compact disc release of these scores included on THE JOHN MORGAN COLLECTION, VOLUME 1, remastered and reconstructed from the composer’s own elements by James Nelson at Digital Outland with assistance from composer William Stromberg. The booklet includes exclusive liner notes written by author Randall Larson, with the participation of composer John Morgan and comments from Kirk Henderson, director of THE VISAGE.