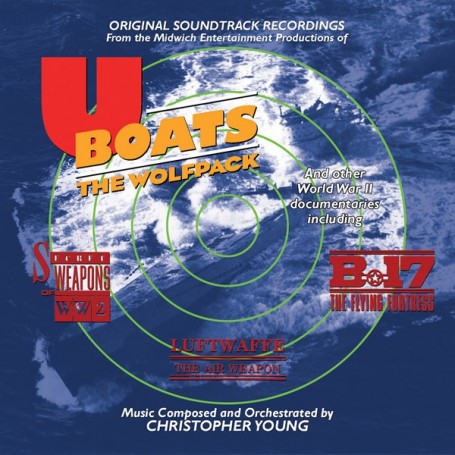 BUYSOUNDTRAX Records Presents the original soundtrack to U-BOATS: THE WOLFPACK. The album features music composed by Christopher Young as featured in the Midwich Entertainment Productions of ROMMEL, SECRET WEAPONS OF WW2, U-BOATS: THE WOLF PACK, B-17 THE FLYING FORTRESS and LUFTWAFFE – THE AIR WEAPON and other World War II documentaries. The composer’s music was originally used in the theatrical films WHEELS OF FIRE (1984) and GETTING EVEN (1986) and was licensed by producer/director Richard Jones for use with these documentaries.

In the 1980s, Midwich Entertainment produced a series of World War II documentaries that focused on different aspects of military might on both sides of the conflict. U-BOATS: THE WOLFPACK told the real story of how Hitler's submarine fleet almost turned the tide of World War II. SECRET WEAPONS OF WORLD WAR II detailed the attempts to turn the second World War into a futuristic nightmare. What seemed like science fiction in the 1930s and 1940s was slowly becoming real in the secret laboratories of the Allied and Axis Powers, unknown to the rest of the world. B-17 THE FLYING FORTRESS told an exciting account of the planes used in the daring daylight bombing raids that struck at the heart of the Nazi War Machine. These documentaries were well received in their day, featuring incredible combat footage and interviews with some of the brave men who fought to get through the gauntlets of enemy opposition in all theaters of combat. Narration was frequently provided by veteran actor Edward Mulhare (KNIGHT RIDER).

When it came time to consider the music for these documentaries, producer/director Richard Jones wanted to bring a more filmic and narrative feel to the editing and the music and preferred to buck the trend at the time of using synthesizers for the music and instead have orchestral music in his films. In addition to being a documentary producer, Jones was also a lover of movie soundtracks and he launched Cerberus records in 1979 to release soundtracks on vinyl records. Two of Christopher Young’s earliest soundtrack albums, THE POWER and DEF CON 4, were released on the Cerberus label. Like the early work of John Williams bore a similarity to the style of Henry Mancini and early James Horner scoring shared a resemblance with the style of Jerry Goldsmith, so did Young’s early work show the influence of Goldsmith as well, which seemed perfectly appropriate to Jones for a series of documentary films about World War II. Because of the connection to the composer through his record label, Jones was able to license specific tracks from some of the composer’s early films that had not seen wide release yet and use them for his documentary films. Like many composers starting out in Hollywood, Young’s initial efforts bore the influence of those composers who had sparked his interest in a career composing music for films.

Golden Globe-nominated composer Christopher Young has scored nearly 100 films, including films such as HELLRAISER, JENNIFER 8, MURDER IN THE FIRST, COPYCAT, SPECIES, THE HURRICANE, SWORDFISH, THE SHIPPING NEWS, THE HURRICANE, THE CORE, THE GRUDGE, THE EXORCISM OF EMILY ROSE, SPIDER-MAN 3, UNTRACEABLE, THE UNINVITED, DRAG ME TO HELL, THE RUM DIARY, THE BLACK TULIP, SINISTER, KILLING SEASON, THE MONKEY KING and, most recently, DELIVER US FROM EVIL. Born in Red Bank, New Jersey, Young graduated from Massachusetts Hampshire College with a BA in music and did post-graduate work at North Texas State University, studying big band writing and classical composition before moving to Los Angeles in 1980. While enrolled at UCLA, he studied with famed film composer David Raksin. In addition to his career as a film composer, he has also taught composition at UCLA.

BUYSOUNDTRAX Records presents U-BOATS: THE WOLFPACK, featuring music composed and orchestrated by Christopher Young. Released previously on compact disc in 1993, U-BOATS: THE WOLFPACK has been out of circulation for quite some time and difficult to find. U-BOATS: THE WOLFPACK returns to the marketplace with new liner notes written by author Randall Larson, including a new interview with producer/director Richard Jones and the music newly remastered by James Nelson at Digital Outland.