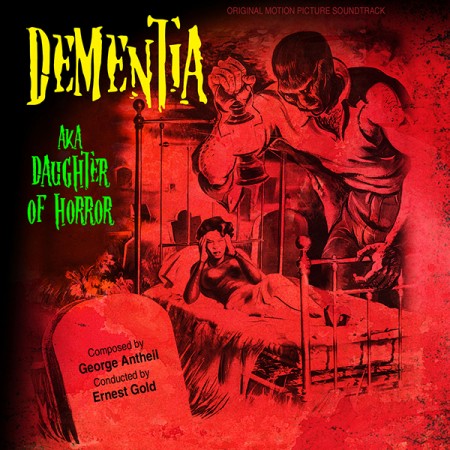 Has there ever been a film that could actually cause Dementia? Well, some would say that the film known as Dementia, a completely one-off, nightmarish journey into the netherworlds of Expressionism, noir, horror, and sexual psychosis, might just fit the bill. Filmed in 1953 but not released until December of 1955 due to censorship battles in New York (the censor board averring the film indecent, inhuman and would tend to corrupt morals and incite to crime). When it finally premiered in New York, the film was reviewed thusly by Variety: “May be the strangest release ever offered for theatrical release.” Dementia features no dialogue at all, just some sound effects here and there and occasional background laughing and chatter. It runs a terse 55-minutes. At some point, producer Jack H. Harris bought the film, made a few changes, and added portentous almost non-stop narration by the one and only Ed McMahon. He also retitled the film, Daughter of Horror, and that version was released in 1957.

One of the biggest contributing factors to the film’s uniqueness was the score by George Antheil, who, in addition to his classical music had written many notable scores for films, including The Buccaneer (1938), Specter of the Rose (1946), Knock on Any Door (1949), House by the River (1950), In a Lonely Place (1950), Sirocco (1951), The Sniper (1952), Not as a Stranger (1955), and post-Dementia, The Pride and the Passion (1957). Antheil’s score for Dementia is almost wall-to-wall music. It’s weird and wonderful, perfectly suiting all of the nightmarish goings on. In fact, one could not imagine a more perfect score for this film. Giving the music an especially eerie texture is the vocal oohs and aahs of Marni Nixon. She was about to become the go-to singer to dub major actresses in film musicals, most notably Deborah Kerr in The King and I (and also An Affair to Remember), Natalie Wood in West Side Story, and, of course, Audrey Hepburn in My Fair Lady. The score was conducted by Ernest Gold, at the time married to Marni Nixon, and a fine composer of both classical works and film music.

As a companion piece, we’re delighted to include Ernest Gold’s wonderful Piano Concerto, written in 1943. Although not critically well received at the time, the concerto is really terrific, filled with wonderful Gold tunes, some jazzy bits, and sounding every now and then like his film music.

DEMENTIA aka DAUGHTER OF HORROR