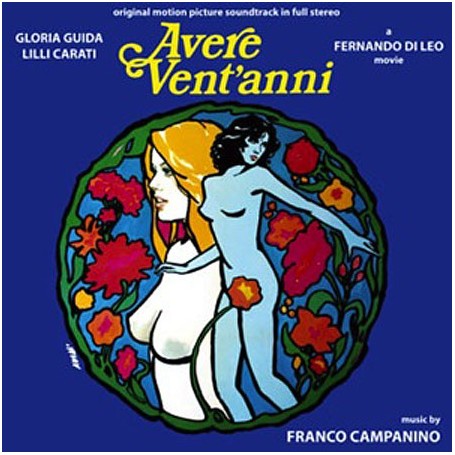 Digitmovies is proud to release the Original SoundTrack by Franco
Campanino for the movies “To Be Twenty” (aka “Avere vent’anni “) and “The
climber” (aka “L’Ambizioso”) for the first time on CD in full stereo.
Soundtracks:
No music has ever been released from the film “To Be Twenty” and on the
master tapes from the recording session we only found the songs played
during the beginning and ending credits. These songs, played by Gloria
Guida, include instrumental versions with a choir. The other music on the film
strip (dance music, country music with guitar and Oriental music) could not be
located. We assume it was M° Campanino archive material.
For “The Climber,” C.A.M. only released a 45 LP record (AMP 150) with two
tracks. On our CD we used the master tapes in stereo from the original
recording session. We were allowed to release every note recorded, including
the song from the single and alternative version, the frenetic detective story
theme from side B, and the romantic themes for the brief love story between
the criminal and the young shop assistant.
TO BE TWENTY (Avere Vent’Anni)
Director and Cast:
Directed in 1978 by Fernando Di Leo. Starring Gloria Guida, Lilli Carati, Ray
Lovelock, Vittorio Caprioli, Vincenzo Crocitti, Leopoldo Mastelloni, and Licinia
Lentini.
Plot:
Lia (Guida) and Tina (Carati) are two beautiful girls, independent and
emancipated, who meet on a beach. They decide to hitchhike together, and
along the way they meet Michele Palumbo (Caprioli). Michele, called “the
Nazariota,” runs a commune in Rome where many strange people live. The
two girls decide to stay in the hippy commune selling encyclopedias to earn
their keep and exploring their sex life. During an inspection, the police find
drugs and the two girls are sent back to their hometowns. While hitchhiking
back, they stop in an isolated restaurant and are harassed by a group of men.
Tina and Lia manage to escape into the forest, but the gang finds the two girls
and savagely rapes and kills them.
Notes about the film:
The film was immediately pulled from Italian cinemas for its violence. It was
then cut and redone with a happy ending. The new ending completely
changed the meaning of the film and it didn’t make much money and wasn’t
released in many cinemas.
THE CLIMBER (L’Ambizioso)
Director and Cast:
Directed in 1975 by Pasquale Squitieri. With Joe Dallesandro, Stefania Casini,
Mario De Luca, Nando Murolo, Raymond Pellegrin, Benito Artesi.
Plot:
Unsatisfied with his role in the gang of organized crime, the young trafficker
Aldo (Dallesandro) slights the boss of the crime group in Naples, Don Enrico
(Pellegrin), and is forced to run away to Rome where he is rescued by a
young shop assistant named Luciana (Casini). In Rome Aldo organizes his
own gang. When he feels strong enough, he returns to Naples where he faces
Don Enrico and forces him to agree to give him half of the “business.” But
things start to go bad for the young high-flyer. His girlfriend Luciana kills
herself after the old boss makes her believe he had been disowned by Aldo.
Aldo kills Don Enrico, but eventually some other criminal bosses eliminate
him.