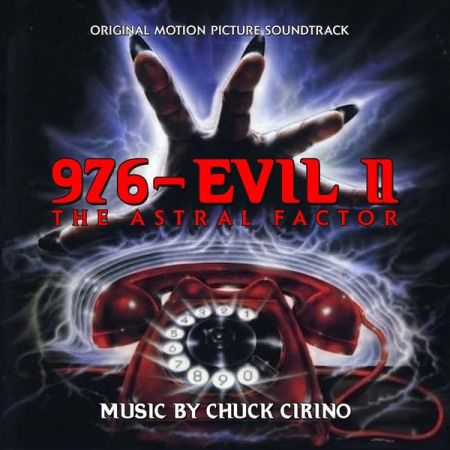 Cinetel’s 1988 horror thriller 976-EVIL, in which people who dial that telephone number receive supernatural powers and turn into satanic killers, was not a critically successful film but its modest box office returns were good enough for the production company to approve a direct-to-video sequel. Thus 976-EVIL II, also known as 976-EVIL II: THE ASTRAL FACTOR was released to home video in the UK in December 1991, and in the US the following April. In the second film, rather than dialing the phone number to receive your horrid horoscope, the devil himself phones you, offering the awful astrological announcement when you answer. While short on logic, 976-EVIL II offers a lot of fun for its low-budget proficiency. 976-EVIL II stars the first movie’s Patrick O’Bryan, once more playing Spike, now a drifter and still tormented by his experiences from the first film. Here he pairs up with wholesome coed and “final girl” Robin (Debbie James), trying to convince the local cops that creepy college professor Mr. Grubeck (René Assa) is murdering the locals, an accusation made rather difficult when the murders continue even after the Prof is locked in jail. As he’s sleeping, though, a disembodied astral projection of himself roams free, decimating the community and soon targets Robin and Spike.

976-EVIL II was Chuck Cirino’s tenth film score for Jim Wynorski. The two had met in New York City due to their mutual love for Ennio Morricone, and they reconnected when both wound up in Los Angeles and Jim asked Chuck to score his 1986 movie, CHOPPING MALL. With Cinetel came a larger budget than usual and it was Chuck’s idea, rather than to score the movie wholly with synthesizers, as he had done with all his previous scores, to take advantage of the budget and bring in a small orchestra to enhance his synths. “What I had in mind is emulating what Jerry Goldsmith and Bernard Herrmann had done back in THE TWILIGHT ZONE days, with small orchestras,” Cirino said in a new interview for the liner notes. He hired orchestrator Tim Simonec, who created the orchestral parts. For 976-EVIL II, Chuck was able to craft some highly effective and unique electronic sound structures that enhanced the film’s moments of horror and made some of its more audacious sequences immensely exciting and fun.

Regarding the score, director Jim Wynorski had asked for a Spaghetti-Western influenced sound for the main title track, which fit the introduction of Spike, riding into town on his motorcycle in the style of the Man with No Name on his donkey. Cirino composed a standalone piece in the proper vibe, with Ed Tomney performing the guitar solo on the track. The score itself is constructed around a Gothic main horror theme. There is also a winsome romantic theme for Spike and Robin. Beyond these two recurring themes, the score consists of a lot of texturally layered motifs and intricate sonic spookery that maintain a continual tension and scariness throughout the film.

Dragon’s Domain Records is excited to bring 976-EVIL II to compact disc for the first time, mastered by James Nelson at Digital Outland with exclusive liner notes by author Randall Larson, with the participation of the composer and the director.