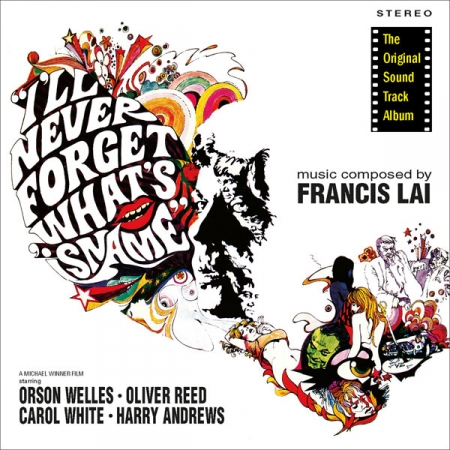 Before teaming up with Charles Bronson on Death Wish, Michael Winner helmed I'll Never Forget What's 'isname (1967), a scathing critique of commercialization through a candid look at the advertising industry. Oliver Reed plays jaded ad director Andrew Quint, who literally has an axe to grind against his boss, Jonathan Lute (Orson Welles). When tasked with an impossible commercial, Andrew designs a straight middle finger to his employee by destroying the products in the process. Much to his surprise, his uncompromising statement goes on to win an award...

A Man and a Woman composer Francis Lai was on board to deliver cheeky, quintessentially ’60s party music with a swingin' sixties vibe—with a hint of disdain mirroring Quint's own dissatisfaction with his era. The instrumental pop songs are countered by lush romantic cues for our hero's quest to find greater meaning in his life and a few tongue-in-cheek cues of “stiff-upper-lip” British pompousness for sequences underscoring a visit to a university. Lai worked with Michael Winner three times—in addition to I'll Never Forget What's 'isname, he also helmed Hannibal Brooks (1969) and The Games (1970).

This is the first-ever CD release of the original Decca LP, containing most of the score. Restored and mastered by Chris Malone from album master tapes provided by UMG, the release features an 8-page booklet with notes by Gergely Hubai that discuss the film, the composer and the score.