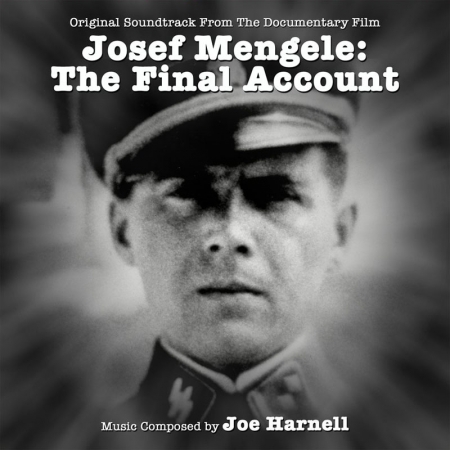 Dragon’s Domain Records presents JOSEF MENGELE: THE FINAL ACCOUNT, featuring music composed by Joe Harnell for the 1995 documentary directed by Dan Setton, written by Ron Frank, based on the books written by Gerald Posner and John Ware about the infamous German officer and physician. During World War II, Mengele was assigned to the Auschwitz concentration camp, where he conducted torturous experiments on its prisoners, showing no consideration for the suffering of these human specimens. As a member of the team in charge of selecting persons to be sent to the gas chambers, Mengele condemned hundreds of captive Jews and other “undesirables” to their deaths, many after suffering torturous experimentation.

Once hostilities ended in 1945 and war trials were likely to take place against members of the Reich, Mengele fled to South America, lived under assumed names, and avoided capture for some thirty years. In February 1979 he suffered a stroke while swimming in the ocean and drowned. Six years later his suspected remains were unearthed and a forensic exam positively identified the bones as those of Mengele.

The score for JOSEF MENGELE: THE FINAL ACCOUNT is performed by a handful of instruments – piano and synth keyboards, an oboe and cello, mostly if not wholly created via digital samples. Much of the music was meant to be present beneath narration, so Harnell focused on rhythmic arrangements, spare melodies, and recurring and cyclical motifs that wouldn’t conflict with spoken commentary and witness accounts. This atmospheric approach also serves the film’s structure by maintaining a fairly unobtrusive sonic ambiance that is felt more than it is made perceptible. Harnell’s music was provided to the production primarily as a series of library tracks, which Dan Setton (who also served as film editor) then inserted into the film wherever he saw fit. The full tracks as recorded by Harnell are presented here in a historically chronological format, which paint a more coherent musical picture.

JOSEF MENGELE: THE FINAL ACCOUNT was among the final scores Harnell would compose. In fact, Harnell’s last five scores were all for fugitive Nazi documentaries: THE HUNT FOR ADOLF EICHMANN (1994), MENGELE: THE FINAL ACCOUNT (1995), and ANGELS OF VENGEANCE (1995) were directed by Dan Setton for his production company, Set Productions. JOSEF MENGELE: MEDICAL MADMAN OF AUSCHWITZ (1996) was produced by Greystone Communications Inc. for the A&E Network’s BIOGRAPHY television series, and ADOLF EICHMANN - THE SECRET MEMOIRS (2002), Harnell’s last film score, was produced by veteran documentarians Nissim Mossek and Alan Rosenthal for their Biblical Productions company.