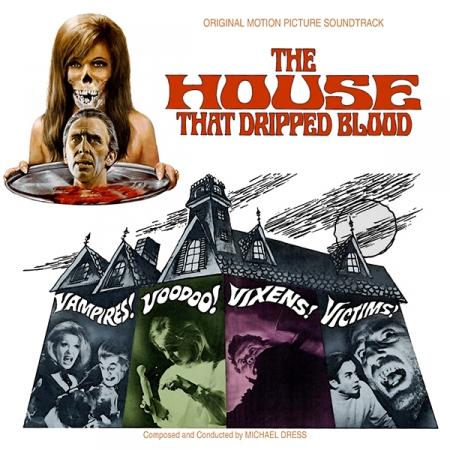 THE HOUSE THAT DRIPPED BLOOD

The House that Dripped Blood was one of the most entertaining of the Amicus anthology horror film series.  The four tales were all based on short stories by Robert Bloch (Psycho), who also wrote the screenplay.  In the director’s chair was Peter Duffell, whose first major film it was (he’d done one low-budget film a decade prior).

They assembled a first-rate cast, including horror icons Peter Cushing and Christopher Lee, as well as Denholm Elliott, Joss Ackland, Jon Pertwee, and Ingrid Pitt.  The film received some decent reviews: Kevin Thomas in the Los Angeles Times said, “Richly atmospheric settings, muted color photography, an outstanding cast and competent direction (by Peter Duffell) do justice to Bloch’s fine script, which deals with psychological terror rather than relying on the typical blood-and-guts formula,” while Variety called it “one of the most entertaining of its genre to come along in several years.”

One of the most interesting choices the filmmakers made was the composer, Michael Dress.  Not a lot is known about Dress, but his very short filmography does include some very interesting films and scores, including Quackser Fortune Has a Cousin in the Bronx, which starred a very young Gene Wilder, and an interesting sci-fi film, The Mind of Mr. Soames, as well as A Touch of Love, starring Sandy Dennis (called Take a Girl Like You in the United States).

For The House that Dripped Blood, Dress created a wonderfully atmospheric score – some of it lives in the world of Humphrey Searle’s The Haunting, but Dress’s music is his own and it really gives the stories in the film an interesting texture and feel.  There’s a lot of percussion and weird effects, organ, a solo female voice floating in the air, harpsichord, vibes, strings – it’s all very hallucinogenic and off-kilter and really wonderful.

This is the premiere release of The House that Dripped Blood.  The transfers were made from the 35mm magnetic music-only mixing elements and the mono sound is crisp and clear and really excellent.