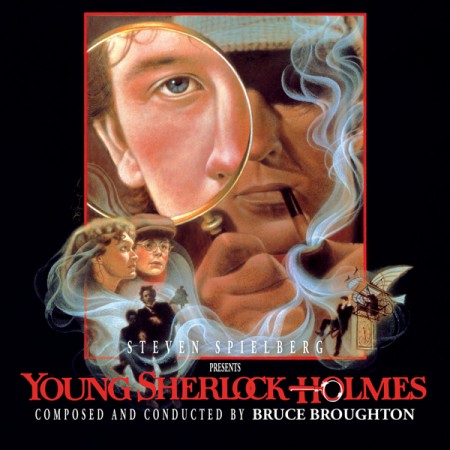 At last! The 2-CD premiere of Bruce Broughton's complete, wildly popular soundtrack for Steven Spielberg's presentation of Young Sherlock Holmes, directed by Barry Levinson, written by Chris Columbus, starring Nicholas Rowe. Though Broughton has such monumental scores as the Oscar-nominated Silverado and thundering Tombstone to his credit, it is this rousing, tuneful and dynamic music for young Holmes and his first big adventure that brings Broughton the most attention amongst fans. Understandable! Levinson's film remains a timeless classic of young adventure and spirited energy, melded with danger and a touch of tragedy. Broughton underscores two thirds of the picture with his finest melodies and most vivid derring-do. Ideas seem boundless: the main adventure theme, Holmes music that plays throughout as he works on solving the riddles, a gentle love theme, music for Waxflatter and his flying invention, the villain's motif, a dueling theme for the sword fights... and a massive tour-de-force for orchestra and chorus that underlines various sacrifices within the pyramid. All of these ideas weave in and about, sometimes one playing on top of another, some times each playing in subtle disguise, other times all playing in powerful fashion. The harmonic vernacular is dazzling, moving effortlessly from the 19th century England period setting into intense and ferocious, complicated 20th century idioms. Quite simply, Broughton's music for Young Sherlock Holmes serves as a masterpiece in film scoring. Broughton originally selected about 36-minutes of music for the original 1985 album. To present the entire 90-minute work plus several alternates and "extras", Intrada was fortunate to have access to the actual 2" 24-track scoring session masters, housed at Paramount in pristine condition. (Fans familiar with the earlier LP may enjoy knowing that those tracks appear now in their full length, unedited versions as recorded and not in their truncated LP counterparts.) The stereo sonics are stunning, even by today's standards. Through the combined courtesies of Paramount Pictures, Geffen Records and UMG, this magnificent complete soundtrack finally becomes a long-awaited reality! Bruce Broughton conducts the Sinfonia of London.