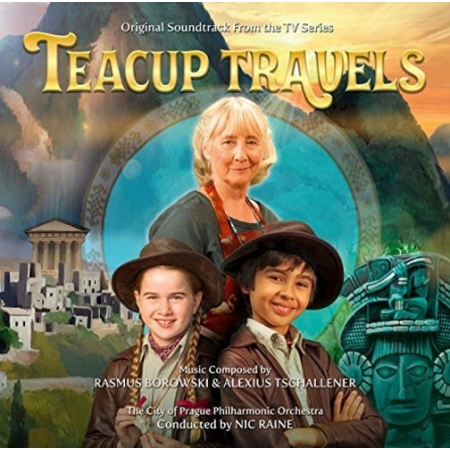 TEACUP TRAVELS: DISCOVERY THROUGH ADVENTURE Since the launch of Teacup Travels in 2015 on BBC’s channel CBeebies, Great Aunt Lizzie has been around the world and back again, wooing audiences with her spectacular stories of long ago and far away. And whether you’re five or sixty-five, Lizzie weaves a tale so well you believe you’re really there with Charlotte, Elliot and Lokesh trekking across the ancient world.

Imagine if every time you visited Great Aunt Lizzie on your way home from school, she sent you off on an adventure back into the mists of time. Sipping tea, Charlotte, Elliot and Lokesh listen as Lizzie spins another yarn, her words so enchanting they can’t help imagining themselves long ago and far away. And as their imaginations take flight, the ancient world springs to life in storybook colours and the young adventurers stride out into the world as it used to be; among the temples of Ancient Greece, the mountains of Edo Japan, the watery world of the Vikings and the forgotten cities of the Mayan Empire they run into hapless aristocrats, meditating monks, bumptious warriors and old retired hunters selling street food.

Teacup Travels is a unique blend of fictional adventure, bringing history to life for 4 to 6-year olds – the show was an immediate hit attracting UK preschool audiences in excess of half a million and remaining in the top ten children’s programmes for the much of its first run. After its 2016 launch in Australia, this popular show was also at number one ‘down-under’.

Julia Bond, BBC Children’s Independent Executive says, “Teacup Travels is a lovely collaboration between museums, who are experts in their own field of archaeology, and creative storytelling. Through Charlotte and Lokesh we experience a lovely collection of stories wrapped up in the comforting voice of Great Aunt Lizzie, played by Gemma Jones.”

The CBeebies hit children’s TV series ‘Teacup Travels’ was created by the Edinburgh based TV and Film production company Plum Films. It was produced by Micky MacPherson and Simon Parsons and is based on an original idea by Anthony Bibby. Rasmus Borowski’s versatility as a film composer shows best in his sparkling compositions of classical orchestra music as well as energy driven rock-scores or beautiful string quartets. His most famous work is the melodic and innovative Filmscore to the successful BBC-Series “Teacup Travels”. He composed the music for TV Movies like “1000 Mexicans” as well as for short films like “Meat the Campbells” and “The Dead Meat”. His acting work is best known from “Star Wars – The Old Republic” where Rasmus lends his voice to the Sith Warrior in the German version of the game.

Rasmus Borowski was born in 1974 in Hamburg, Germany. At the age of four he made his first appearance as a singer in a recording studio and started playing guitar when he was 7. In 1998 / 2002, he took the Degree Course for Pop Music at the Hamburg University for Music and Theatre. He completed Composition Masterclasses by Academy Award-Winning Composer Jan A.P. Kaczmarek and Japanese Academy Awardee Shigeru Umebayashi.

Alexius Tschallener lives and works in Switzerland as a composer and producer of music in many genres but with a focus on classical orchestral works and movie scores. He is a lecturer in music for Film, Theatre and Media at the Zurich University of Arts and he is also in the international jury of the Global Film Music contest Oticon’s Faculty. Alexius grew up in a musical environment and received his musical education in the subjects of piano and church organ. He has taken part in the productions of many international classical artists, including Prof. Francisco Araiza (Mexico City Opera), Noëmi Nadelman (Zurich Opera) and Javier Camarena (Metropolitan Opera New York)