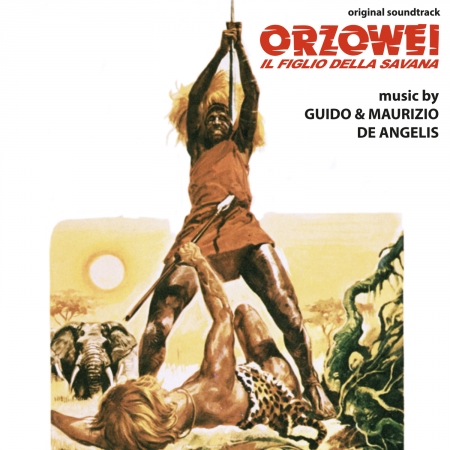 Digitmovies releases for the very ?rst time on CD the complete edition in full stereo of the OST for the Italian cult TV series "Orzowei" which was composed by the proli?c brothers Guido & Maurizio De Angelis. Based on the novel “Orzowei” written by Alberto Manzi and issued in 1955, the story was adapted into 13 episodes of an international TV hit series wich was produced in 1976 by Italian and German companies. It was directed by the French ?lmaker Yves Allégret and starred Peter Marshall as Isa / Orzowei, the British star Stanley Baker, Doris Kunstmann, Vincenzo Crocitti, and Bonne Lubega. This TV program was broadcasted in Italy in early 1977 and presented again with version especially re-edited for cinema theaters called "Orzowei - il ?glio della savana” (“Orzowei - Son of the Savannah”).

Isa, a white child abandoned in the forest of South Africa, is found and raised like a son by an old great warrior and by an old woman, both of them belonging to the Swazi people, an ethnic grouping of the Bantu tribe. Due to his white skin he is jokingly called Orzowei, “the found”. After his escape from the Swazi village, he takes refuge to a forest where he is adopted as a son by Pao, the sage man of a Bosciman tribe. At the end Orzowei will really have to ?ght against the Swazi, the people who had brought him up as a child, and to defeat Mesei, his arch enemy.

In those days only one single was issued: RCA BB 6054, a very big international record hit. This CD has been possible thanks to the stereo master tapes which have been well preserved in the RCA archives. Concerning "Orzowei" besides the 45 rpm single versions “Orzowei” and “Le notti di Orzowei” we have also added alternate takes of the famous theme song like a different mix, the instrumental version, an evocative version with an echoed solo ?ute, the very cool karaoke version, an alternate take of “Le notti di Orzowei” without ?ute (all the original material discovered on the master tapes, if we consider that possibly in the TV series library music was re-used). Only recently we were able to discover on another mastertape three extra alternate takes that with big joy we include in thi very new re-issue. A OST of the ’70s Italian TV CULT which we absolutely wanted to rescue and preserve to honour the musical art of Guido & Maurizio De Angelis.