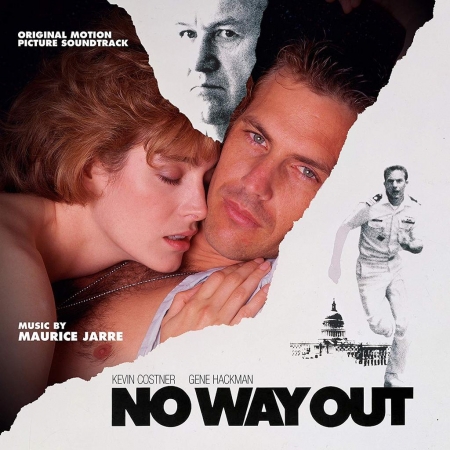 NO WAY OUT (STANDARD EDITION)

No Way Out is a 1987 American political thriller film. It stars Kevin Costner, Gene Hackman, and Sean Young. Will Patton, Howard Duff, George Dzundza, Jason Bernard, Fred Thompson, and Iman appear in supporting roles.  The film is a remake of The Big Clock (1948). Both films are based on Kenneth Fearing's 1946 novel of the same name.

Maurice Jarre is considered among the greatest film composers of all time.  In 1961 Jarre's music career experienced a major change when British film producer Sam Spiegel asked him to write the score for the 1962 epic Lawrence of Arabia, directed by David Lean. The acclaimed score won Jarre his first Academy Award and he would go on to compose the scores to all of Lean's subsequent films. He followed with The Train (1964) and Grand Prix (1966), both for director John Frankenheimer, and in between had another great success in David Lean's Doctor Zhivago, which included "Lara's Theme," and which earned him his second Oscar. He worked with Alfred Hitchcock on Topaz (1969); though Hitchcock's experiences on the film were unhappy, he was satisfied with Jarre's score, telling him "I have not given you a great film, but you have given me a great score."

He was again nominated for an Academy Award for scoring The Message in 1976. He followed with Witness (1985) and Dead Poets Society (1989), for which he won a British Academy Award.

In 1990, Jarre was again nominated for an Academy Award scoring the supernatural love story/thriller Ghost. His music for the final scene of the film is based on "Unchained Melody" composed by fellow film composer Alex North.

He was well respected by other composers including John Williams, who stated on Jarre's death, "(He) is to be well remembered for his lasting contribution to film music...we all have been enriched by his legacy."