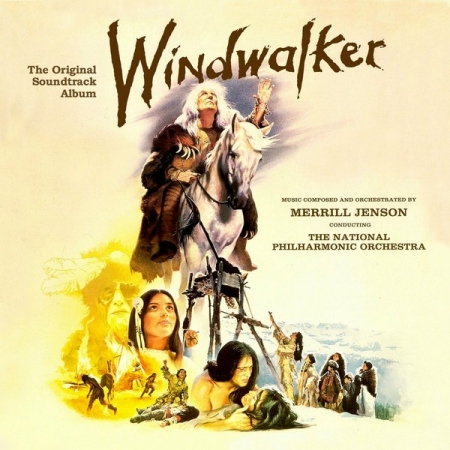 Released in 1981, WINDWALKER tells the story of an old Cheyenne warrior and his family as they travel through  what will become the state of Utah during the Winter months of 1797. When he was younger, Windwalker (Howard) was witness to the death of his wife, Tashina, and the kidnapping of one of his sons during a raid by rival Crow warriors. After years of searching for his missing son, Windwalker dies, leaving the fate of his family in the hands of his remaining son, Smiling Wolf (Ramus). After Windwalker’s funeral, Smiling Wolf leads his family south to rejoin the rest of the tribe. During an attack by Crow warriors, Smiling Wolf is badly injured and the family is forced to hide. The Great Spirit reawakens Windwalker and he rejoins his family. Windwalker leads the family to a sacred Cheyenne cave, where he uses Cheyenne medicine to heal Smiling Wolf’s wounds. Windwalker and his sons prepare some traps for the Crow warriors and are able to whittle them down to two. One of the warriors is revealed to be Windwalker’s long-lost son. With his family safe and his son returned to him, Windwalker confronts the remaining Crow warrior and offers him peace. The Crow refuses him and forces a final confrontation. His son fights the Crow in his father’s place and defeats him, making it possible for Windwalker to return to the afterlife and his beloved Tashina.

Almost a forgotten film now, WINDWALKER was a refreshingly different film for its time. All the dialogue in the film, except for the opening narration, is spoken in authentic Cheyenne and Crow dialects, with subtitles where necessary to aid the storytelling. Also, unlike other Westerns of the day, there are no cowboys, ranchers or other characters one would expect to find in an American made Western.

Merrill Boyd Jenson was born in Richfield, Utah on January 20, 1947. He was introduced to music at an early age with his mother teaching him how to conduct music in front of a mirror while listening to recordings of the Mormon Tabernacle Choir. She also taught him to play the piano while his father taught him the trumpet. He attended Brigham Young University where he directed the BYU Cougar Marching Band and graduated with a degree in Music Composition. Soon after graduating, Jenson took on odd jobs at the film studios in Los Angeles in order to be near the industry. While there he was able to meet and associate with some of the great film composers of the day.

Jenson eventually landed a few tiny composing projects at the LDS Motion Picture Studios. His big break came when he met director Kieth Merrill. Merrill hired Jenson to compose the score to the sequel of his Academy Award winning documentary THE GREAT AMERICAN COWBOY. Jenson’s score to THE GREAT AMERICAN INDIAN was recorded with him conducting the London Philharmonic Orchestra. This was the first of many collaborations between Jenson and Merrill including WINDWALKER, HARRY'S WAR, and TAKE DOWN.

Jenson worked for many years with Bonneville Communications writing music for films and commercials for The Church of Jesus Christ of Latter-day Saints including The Phone Call (1977). During this time Jenson composed music for the award-winning Homefront commercials and films such as HOW RARE A POSSESSION: THE BOOK OF MORMON. Later he also wrote the music for the three films that have played in the Legacy Theater in the Joseph Smith Memorial Building on Temple Square in Salt Lake City, UTAH: LEGACY, THE TESTAMENTS OF ONE FOLD AND ONE SHEPHERD, and JOSEPH SMITH: PROPHET OF THE RESTORATION.

Jenson collaborated with award-winning composer Sam Cardon to compose the music for three PBS documentaries by producer and director Lee Groberg: TRAIL OF HOPE: THE STORY OF THE MORMON TRAIL, AMERICAN PROPHET: THE STORY OF JOSEPH SMITH, and SACRED STONE: TEMPLE ON THE MISSISSIPPI. A recent career highlight for him was composing the score for the critically acclaimed film EMMA SMITH: MY STORY which played in theaters across the country.

Merrill Jenson has composed film scores for over thirty films including EMMA SMITH: MY STORY, JOSEPH SMITH: PROPHET OF THE RESTORATION, THE TESTAMENTS OF ONE FOLD and ONE SHEPHERD, LEGACY, HARRY'S WAR, and WINDWALKER. Jenson has also composed several concert productions including a symphony that premiered at Carnegie Hall. Additionally, he has composed music for many television commercials including the acclaimed Homefront ads, music for three outdoor pageants, and several albums. He currently lives in Provo, Utah with his wife Betsy Lee Jenson.

Previously released on vinyl by Cerberus Records at the time of the film’s release, Dragon’s Domain Records is excited to bring WINDWALKER to compact disc, newly remastered by Digital Outland. The booklet includes liner notes written by composer Merrill Jenson.

WINDWALKER is a limited edition release of 1000 units.