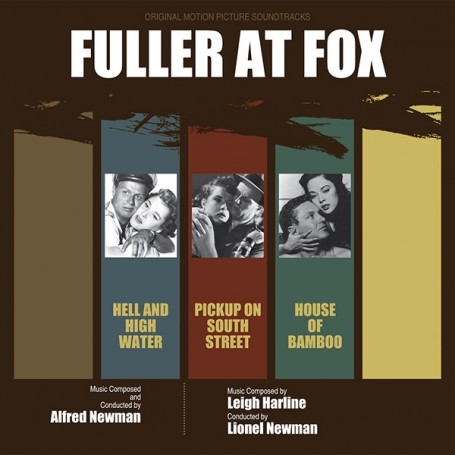 Kritzerland is proud to present three scores on two-CDs at a one-CD price, all from the brilliant films of Samuel Fuller:

HELL AND HIGH WATER
Composed and Conducted by Alfred Newman

Samuel Fuller began his working relationship with Daryl F. Zanuck and Twentieth Century Fox in 1951 with Fixed Bayonets! That film was quickly followed by the three films whose scores are included in this set – Hell and High Water, Pickup on South Street, and House of Bamboo.

For Hell and High Water, Fuller assembled a first-rate cast, including Richard Widmark, Victor Francen, Cameron Mitchell, David Wayne, Gene Evans, Richard Loo, and, as Denise Girard, and newcomer Bella Darvi. The film’s handsome photography was by Joseph MacDonald and the music was by Alfred Newman, the head of the Fox music department, who by the time of Hell and High Water had already won six Oscars.

Newman, of course, turned in an exemplary score, highlighting all the action, suspense, and romance in his usual brilliant way. The score is yet another Newman classic from an era in which he simply could do no wrong.

The year prior to Hell and High Water, Fuller made a noir classic for Fox, Pickup on South Street, which starred Richard Widmark, Jean Peters, Richard Kiley, and the extraordinary Thelma Ritter (who was nominated for an Oscar for this film). The score was written by Leigh Harline. At that point, Harline had already won an Oscar for Best Song with “When You Wish Upon a Star,” from Walt Disney’s Pinocchio (lyrics by Ned Washington), and one for Best Original Musical Score for that film. Harline’s music is top-notch, starting with his propulsive main title music, which really sets the mood for what’s to come – jagged, bluesy, and jazzy.  The film’s music perfectly defines its characters, drama, and milieu. It’s a great score for one of Fuller’s finest films.

Finally, we have House of Bamboo, starring Robert Ryan, Robert Stack, Shirley Yamaguchi, Cameron Mitchell, Brad Dexter, Sessue Hayakawa, DeForest Kelley, and Biff Elliot. The film is classic Fuller and while it takes place in Japan it more often takes place in Fullerland. Once again, Fuller turned to Leigh Harline for the score and Harline turned in what was and is one of his best scores. It is lush with melody and orchestral color, and the Fox orchestra has rarely sounded more beautiful. Harline remains one of the most under-appreciated of the Golden Age composers, but hopefully with each CD release, new fans will emerge and people will appreciate just how great he was.

All three scores have had previous releases but are long out of print. For this release, Hell and High Water has received a loving upgrade from Mike Matessino, and he has newly mastered the other two scores. We are thrilled to follow up our release of Preminger at Fox with this tribute to one of the most interesting and one-of-a-kind directors in all of cinema – Fuller at Fox – with the music of two wonderful composers who knew exactly what Samuel Fuller and his films were all about.

Composed and Conducted by Alfred Newman