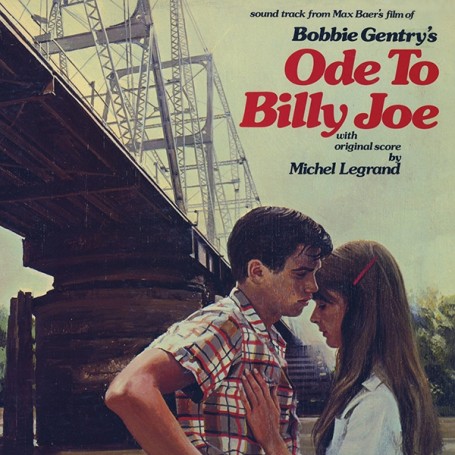 In 1967, Billie Joe jumping off the Tallahatchie Bridge was one of the hottest topics of that summer, all over the world. The fact that it all had to do with a surprise number one hit song shows the power of great storytelling. Everyone was conjecturing what it was that was thrown off the Tallahatchie Bridge and why Billie Joe had killed himself.  It became part of popular culture almost instantly. The song garnered eight Grammy nominations, winning three for Gentry and one for arranger Jimmie Haskell.

Nine years later, Warner Bros. decided to turn the song into a feature film and hired author Herman Raucher (Summer of ’42) to do so. Max Baer, Jr. directed and produced the film – he was, at the time, best known for playing Jethro Bodine on the hit TV series The Beverly Hillbillies. Young actors Robby Benson and Glynnis O’Connor were cast in the leads, along with Joan Hotchkiss, James Best (giving a sensitive and wonderful performance), and others. Raucher changed the spelling of Billie to Billy and his screenplay fleshed out the events of the song, and gave the audience the reason for Billy Joe’s jumping off the Tallahatchie Bridge.

The film was a box-office hit. Roger Ebert’s review said, “What’s good about the film is that it doesn’t just exploit the materials of the Gentry song. It goes to some lengths to give us a touching, convincing portrait of its people.” Much of that sensitive, touching romantic tragedy can be attributed to the wonderful score by Michel Legrand. Legrand had already scored another hit Warner Bros. film written by Herman Raucher, Summer of ’42, providing that film with an incandescent score and getting an Oscar for it. For Ode to Billy Joe, he wrote a score of great beauty, basically variations on a theme, and one of his most beautiful themes at that. Legrand was and is one of the great film melodists of all time and his music is instantly identifiable and unique to him. While it’s a short score, it does exactly what it needs to do in the film.

Ode to Billy Joe was released on LP by Warner Bros. Records.  This is its first CD release. In addition to Legrand’s score cues, the album also contained the classic Gentry song as well as some country-flavored source cues. It has been mastered from the original album masters.