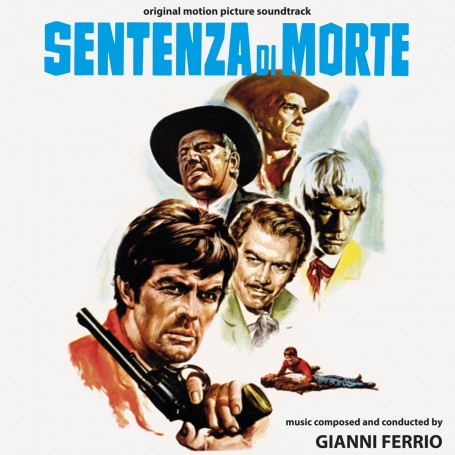 Gianni Ferrio (November 15, 1924, Vicenza  - 21 October 2013, Rome) was a very prolific composer for the genre of Western films. For "Death Sentence," Ferrio created something unique and original: an OST dominated by a blues vibe with a feeling of lounge music. The album opens and closes with the evocative "The Last Game" performed by Nevil Cameron (for legal / contractual issues, we could not include the Italian version of the song, which came out on the single under the label Tiffany Records TIF 538).

C.A.M. had originally released an LP (10.009 MAG) with nineteen tracks in mono lasting 33:07 minutes. For our CD (total playing time of 53:50 minutes), we were able to use the original album master which we have re-recorded in its entirety. In 1993, CAM had only published seven pieces from the vinyl on CD (CAM 494 580), combining them with selections taken from two other Spaghetti Western OSTs by Gianni Ferrio: "Blood for a Silver Dollar" and "Sundance and the Kid" (now available in its complete version on CD Digitmovies). In addition to the twelve tracks on the original vinyl which now appear for the first time on CD, we found about twenty minutes of totally new material on the mono master tapes from the recording session.

In this score, the listener will travel to fascinating sonic dimensions alternating between a wild Mexican style of music with guitars and rhythms, instrumental blues passages in different variations of the theme song, and suspense themes. Worth noting is the new song (Tr.21), which is epic and frantic music with wind instruments, electric guitars and percussions to describe a wild ride. Restoring and preserving CDs by the great Maestro Gianni Ferrio, is a moral obligation for us.