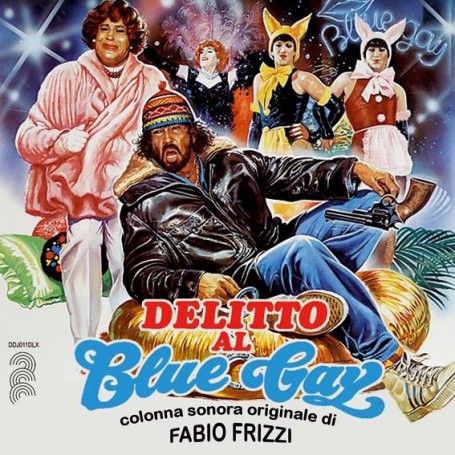 The last delict is that of the “Blue Gay,” a Roman club famous for alternative entertain- ment. The 1984 movie (aka “Cop in Drag”) concludes a cinematic franchise that saw the Milian/Bombolo duo in the guise of Inspector Giraldi and Venticello, his insepa- rable alter ego.
An atrocious murder is committed backstage at a club for customers with exotic tastes. After a few false starts, the investigation will find our commissioner on the trail of the guilty, outside Italy, the full disclosure of an international intrigue.
The discovery of a tape featuring the original recording session, finely restored, al- lowed for the realization of this CD in a bright stereo presentation of the complete soundtrack, including the song “When I Fall in Love with You” sung by the drag queen Colomba Lamar (played by Vincio Diamanti). Suspense and action music alternate with vaudeville sonorities for a display of sounds finally available in this DDJ DLX se- ries release, realized in collaboration with RIBOT, the historical Fabio Frizzi publish- ing company, featuring a 16-page booklet with liner notes by the Maestro himself and a short essay by Fabio Babini on Vinicio Diamanti. Graphic layout by Alessio Iannuzzi. For numbers 11 through 20 in the DLX series, the traditional external cardboard slip- case will not be included. Instead, a single box to house all 10 releases will be given free to all of those who buy the 20th release!