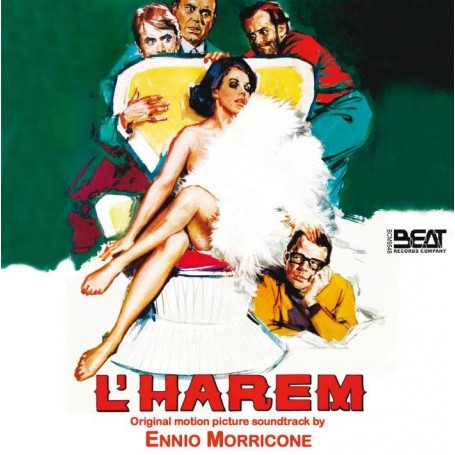 L'harem was directed in 1967 by Marco Ferreri and starred Carroll Baker, Gastone Moschin, William Berger and Renato Salvatori. It tells the story of three men entangled in a relationship with the wonderful Carroll, who can't choose between them. Following their suggestion, she lures them to an isolated villa, like a real harem with the roles inverted. The story ends in tragedy when the she-sultan decides to leave her lovers.

The unique and demanding score of two-time Oscar-winner Ennio Morricone complements the film. The Maestro chose a score partly sacral, both tonal and atonal, availing himself of Gato Barbieri's proficiency on the sax, accompanied by a full orchestra. The atmosphere fully expresses the conflicted soul of the protagonist and is rendered even more exotic by the guitar performance of Bruno Battisti D'Amario, alternating soft velvet executions with more rhythmic cues.

Finally, a definitive version of this score is available, including the cue ''Fermateli!'' from the movie Menage all'italiana (1965), so beloved by the director that he decided to use it again in this film. The CD comes in a jewel case with a 12-page booklet designed by Alessio Iannuzzi, liner notes and mastering by Claudio Fuiano.