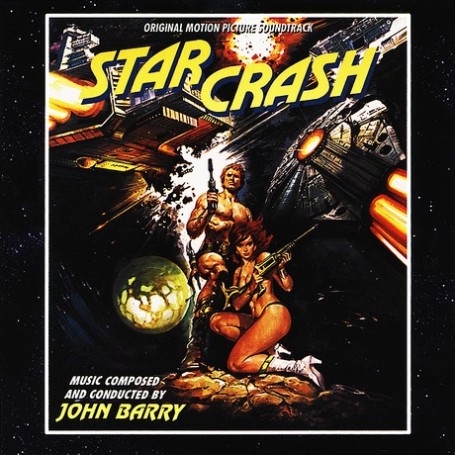 BUYSOUNDTRAX Records presents STARCRASH, featuring music composed and conducted by John Barry for the 1978 camp science fiction classic directed by Luigi Cozzi (aka Lewis Coates) and starring the beautiful Caroline Munro as Stella Star, Marjoe Gortner as Akton, Christopher Plummer as The Emperor of the Galaxy, introducing David Hasselhoff as his son, Simon, Robert Tessier as Thor and featuring the voice talent of Hamilton Camp as the android Elle, versus the evil might of Count Zarth Arn, played by Joe Spinell.

Released in 1978, STARCRASH, originally called THE ADVENTURES OF STELLA STAR, is an Italian knockoff of STAR WARS, lovingly produced with a fraction of the budget or resources necessary to be convincing. But what the film lacks in production value, it more than compensates with warmth and charm, due in part to its casting and to the presence of John Barry’s music. STARCRASH tells the story of Stella Star and Akton, notorious galactic smugglers employed by the Emperor of the Galaxy to track down the location of Count Zarth Arn, who is developing a dangerous weapon that threatens the entire galaxy! Working alongside Thor, Chief of the Imperial Police and his android sidekick, the six-gun packing Police Robot Elle, the quartet scour the corners of the Haunted Stars, encountering Amazons on horseback, android gladiators, prehistoric Trogs and a giant metal Guardian straight out of a Ray Harryhausen film. For the music, the producers turned to composer John Barry, then world-renown because of his work on the James Bond films. STARCRASH represents an early foray for the composer into the realm of science fiction and he would soon return again when he worked in 1979 on THE BLACK HOLE, Disney’s attempt to compete with rival studios in the wake of STAR WARS and MOONRAKER, that year’s entry in the James Bond series, which featured many science fiction elements.

Born in 1933, in York, England, composer John Barry is known the world over for his work on the James Bond series, beginning in 1963 with FROM RUSSIA WITH LOVE and scoring nearly all of the Bond films up until 1987 with THE LIVING DAYLIGHTS. He has received the Academy Award four times for his work on BORN FREE, THE LION IN WINTER, OUT OF AFRICA and DANCES WITH WOLVES. He has also received a Grammy for his score to DANCES WITH WOLVES. In addition, he has been nominated multiple times for his work by BAFTA, EMI, the Emmys and the Golden Globes. In England, he was awarded the title of Officer of the Order Of The British Empire for his services in music. In France, he holds the title of Commander in the National Order Of Arts And Letters. He has composed music for films such as ZULU, THE IPCRESS FILE, BORN FREE, THE LAST VALLEY, MARY, QUEEN OF SCOTS, ROBIN AND MARIAN, BODY HEAT, FRANCES, CHAPLIN, INDECENT PROPOSAL, ENIGMA and many more.