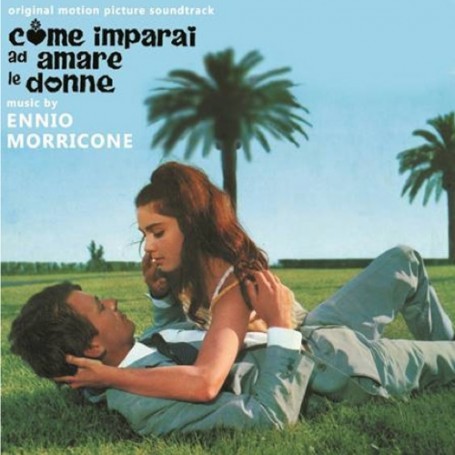 COME IMPARAI AD AMARE LE DONNE (aka HOW I LEARNED TO LOVE WOMEN) is a comedy directed in 1967 by Luciano Salce and starring Robert Hoffmann, Nadja Tiller, Sandra Milo, Elsa Martinelli, Romina Power, Anita Ekberg, Michèle Mer- cier, Mita Medici, Orchidea De Santis, Mariangela Giordano, Margherita Horowitz, Bernadette Kell, Zarah Leander, Erika Schrahum, Sonia Romanoff, Gigi Ballista, Vit- torio Caprioli, Carlo Croccolo, Heinz Erhardt, Franco Morici and Gianrico Tedeschi. Having recently graduated from college (where, being the founder’s son he was hosted begrudgingly), 18-year old Roberto Monti, with his innate passion for engines, finds a job as a mechanic in a service station and later as a car salesman. Among his various love interests is Laura, a 35-year old Baroness and owner of a fashion house, and Olga, a friend of Laura’s and owner of a helicopter factory. A meeting with 16-year old Irene leads Roberto to lose his job as well as his friendship with Laura. The young man’s job hunt ends with his employment by Olga, who also happens to be Irene’s aunt, allowing the girl to tighten her love network and induce Roberto to marry her.
This film gave Ennio Morricone the opportunity to compose a score that merges clas- sical flavor and romantic themes (“Alta moda,” “Alla corte di Re Luigi XVI,” “La duchessa”) with contemporary dance music based on the main theme, “Pioggia sul tuo viso,” including on three tracks a slow lounge piece performed by the British band the Sorrows (including the shake dance-floor version of the Main Titles and a rare stereo mix). Maestro Morricone reprises this tune with different and always fascinating beat arrangements for orchestra and choir until the splendid Finale that summarizes the main themes. For the already-prolific Roman composer it was easy to be inspired in the presence of so much female beauty protagonist in the movie, creating memorable themes performed by I Cantori Moderni di Alessandroni from which the incredible voice of Edda Dell’Orso emerges, used here as a true instrument in the orchestra (“La donna gattina”).
This brand new reissue is a must in the discography dedicated to two-time Oscar-win- ner Ennio Morricone, and it will increase awareness of the musical art of this Italian genius for new generations of film music fans.
The CD is packaged in a jewel case with a 12-page booklet designed by Alessio Ian- nuzzi. Audio mastering and liner notes by Claudio Fuiano.