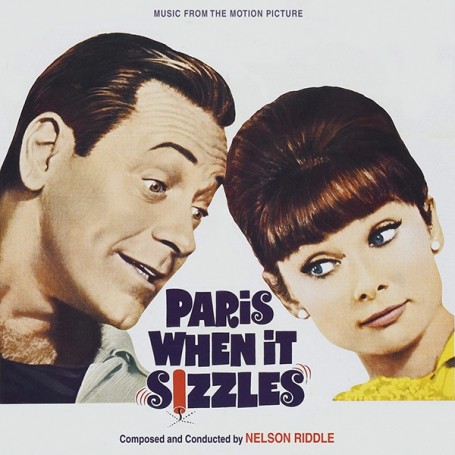 PARIS WHEN IT SIZZLES

What does it take for Paris to Sizzle?  Well, add one part William Holden, one part Audrey Hepburn, appearances by Noel Coward, Tony Curtis and Marlene Dietrich, a screenplay by George Axelrod (Breakfast at Tiffany’s, The Manchurian Candidate), and direction by Richard Quine, a delectable score by Nelson Riddle, and you have a recipe for Sizzle indeed. And yet critics were, for the most part, dismissive.   It’s hard to imagine why when watching it now, which is probably why it has a legion of fans who understand and appreciate the spoofery and the star wattage of Holden and Hepburn.  In fact, the film is like a frothy, sparkling glass of champagne, a cream puff, and a real delight.

Helping to bring the film to effervescent life is the eclectic and fun score by Nelson Riddle.  One can only imagine that Riddle had a field day with this score, getting not only to underscore the film proper, with its gorgeous themes, but also to underscore the movie parodies and to create some wonderful source cues.  His main romantic theme is one of his best, and the score is kind of the poster child for how to write a great score for a comedy.  It’s a delight from start to finish and a perfect example of what nobody did better than Riddle.

For this release, for the first time ever, we present the entire score on CD 1 (including the wonderful Fred Astaire vocal on “That Face”), all beautifully restored by Chris Malone from all the elements in the Paramount Pictures vaults.  On CD 2 we present alternates and bonus tracks, followed by the original Reprise LP soundtrack presentation – the complete score and the album presentation are in sparkling stereo.

So, take a trip to the City of Light and prepare to be entranced and captivated by Nelson Riddle’s wonderful score to Paris When it Sizzles.

Paris When it Sizzles is limited to 1000 copies only.