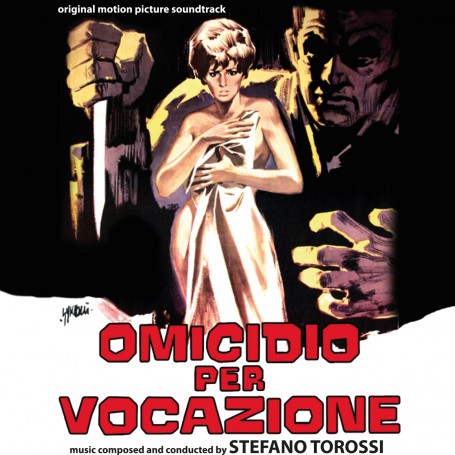 Stefano Torossi composed a lounge-style score where the Noir side of the story is contrasted with a danceable shake (Tr.1, Tr.2, Tr.3, Tr.5). There are also plenty of romantic themes (Tr. 4, Tr. 8) as well as an atmosphere of suspense typical of giallo films (Tr. 7).

Originally C.A.M. had released 8 musical selections on a promotional LP (C.A.M. PRE 2) paired with the OST from the film (“E’ stato bello amarti”). This extremely rare vinyl was released for the first time on CD by Fin de Siècle Media (FDS32) in Sweden in 2009.

For our CD we were able to access the master tapes in mono from the original recording session. We found some unreleased material such as fabulous Bossa, folk music, and other alternative and dance versions of previously released pieces - and all approved by Maestro Torossi.

PLOT
Oscar, a railroad worker, dies when he is hit by a train and leaves a sizeable inheritance to his adopted son Jeannot. The conditions stated in the will arouse a fierce reaction from the other three children –Colette, Simone and Rosalie as well as their partners/lovers.

Some time later a tortured body wearing Jeannot’s clothes is discovered on the railroad tracks. While the police are fumbling around in the dark, Rosalie, Colette and Simone’s lover are murdered one by one while Leon (Rosalie’s husband) dies in an attempt to escape from the police- who suspect him of the triple homicide. Simone is now the only heir left and she decides to leave the family home and hide out in the city. But a terrible surprise awaits: Jeannot is not only alive but he and a corrupt police officer have devised a plan to kill all the heirs. Together they try to kill Simone but the deputy inspector, who had been suspicious of his boss, arrives in time to save her.