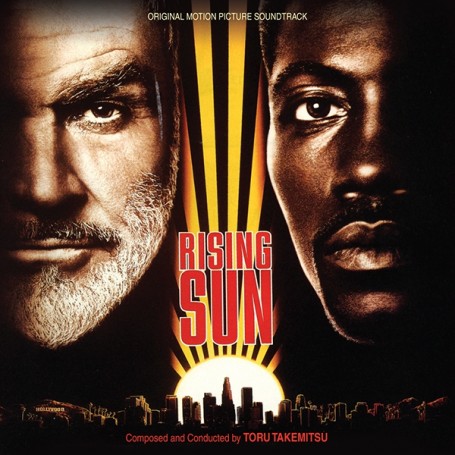 Rising Sun, Michael Crichton’s 1992 follow up to his blockbuster novel Jurassic Park, was a detective thriller with a difference – one examining Japanese/American relations or, as Newsweek called it, “A paranoid polemic masquerading as a murder mystery.” Twentieth Century-Fox snapped up the movie rights instantly.   Crichton co-wrote the screenplay with Michael Backes and the film’s director, Philip Kaufman.  Cast in the two leading roles were Sean Connery and Wesley Snipes.  As with the novel, critics were divided on the film, and, as with the novel, rather vehemently so.   The critics who didn’t like the film really didn’t like it, but there were plenty who did.  Rolling Stone critic Peter Travers found flaws but noted, “The flaws don’t cripple what is a fiercely funny, exciting and provocative detective story about the crime of corporate culture – crimes that transcend race and geography.”  The Washington Postsaid, “A thoroughly gratifying prestige thriller, thanks to riveting suspense and two brilliant stars.”   The film performed reasonably well at the box office and spent ten weeks on the top ten box office chart.

With two great star performances, and a great supporting cast, the film is sleek and looks great thanks to the brilliant cinematography of Michael Chapman.  One of the smartest decisions director Kaufman made was hiring the incredible Japanese composer, Toru Takemitsu.  It was a bold choice and a choice that really paid off.  Takemitsu composed unique scores for some classic Japanese films, including Woman in the Dunes, Kwaidan, The Face of Another, Double Suicide, and others.  In 1970 he scored director Akira Kurosawa’s film, Dodes’ku-den, turning in a score of great warmth and melody that made Kurosawa’s beguiling film even more beguiling.  His second score for Kurosawa, Ran, was a true masterpiece of film scoring, a symphonic work of tremendous power and beauty.  Rising Sun would be his first and only American film scoring assignment.

Takemitsu wrote a very long score for the film, but in the end several incredible cues went unused and the music that was used was occasionally truncated and moved around.  A CD release of the score did not present it in the best light, with a short running time and several pieces not by Takemitsu.  The general impression was that Takemitsu’s score just wasn’t that interesting.  We’re hoping that this first-ever complete CD release will change that view because hearing the score as Takemitsu wrote it is an entirely different experience – an addictive, mesmerizing neo-noir tone poem of exquisite orchestral color and sounds (including wonderful use of the Ondes Martinot), with a great main theme that weaves itself in and out of the score like wisps of smoke.   It is a major rediscovery and one that would hopefully put the music’s reputation firmly where it belongs – as one of the best and most interesting scores of the 1990s.   The previous CD release had only about twenty-six minutes of Takemitsu’s score.  This release adds over forty minutes of score cues and the score is presented as it was meant to be heard in the film.