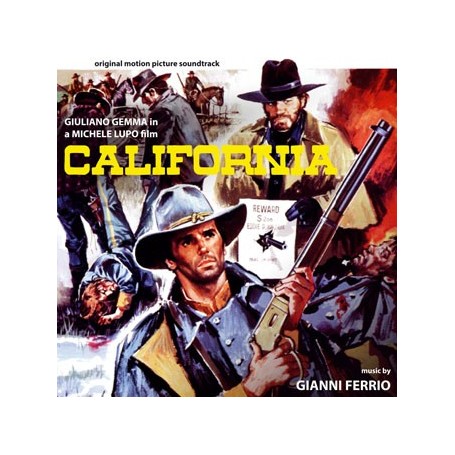 For the absolute first time on CD, Digitmovies releases two complete soundtracks by Gianni Ferrio for the Spaghetti Westerns “California” (aka “Adios California”) and “Reverend’s Colt” (“Reverendo Colt”).
Soundtracks:
From “California,” only an EP single was released by Ariston, with the film’s main score on side A. The master tapes from this OST were thought to have been completely lost until the mono master tapes were found in the private archives of Gianni Ferrio, which made this CD possible to create (63:10 minutes). Unfortunately the originals were not in good condition, and even after restoring them some tracks are still damaged. Nevertheless, this CD should be considered a miracle. Ferrio wrote a wistful main score with a male choir, orchestra and harmonica which alternates between Western themes and other more modern themes with a touch of rock. The score is brought up later in the commentary. Another precious discovery from the private archives of Ferrio was the OST from “Reverend’s Colt.” Also this OST was thought to have been lost forever, but it was found under the pseudonym “Lady Park”. Thanks to a mono master tape, fans can enjoy the excellent music performed by Alessandro Alessandroni on guitar and whistle, accompanied by winds, horns and drums for the main score.

CALIFORNIA
Director and Cast:
Directed in 1977 by Michele Lupo, starring Giuliano Gemma, William Berger, Miguel Bosé, Raimund Harmstorf, Paola Dominguin, Franco Ressel, Robert Hundar, Malisa Longo, Nando Murolo, Dana Ghia, Chris Avram.
Plot:
The return of General Lee signals the end of the Civil War. Among the ex-Confederate prisoners, still at the mercy of the winners, are the young California (Gemma) and his newfound friend Willy Preston (Bosè). While heading back to their home states, they are attacked by three Yankees who want to punish them for stealing a horse, and Willy is killed. California decides not to go home to Georgia and instead pay a visit to Willy’s parents (Berger, Ghia) and sister Helen (Dominguin) to inform them of their son’s death and to give them back his purple heart. He is welcomed like a second son and soon begins to develop feelings for Helen, so California decides to stay with the Prestons.
One day however, the "bounty-killer" Rope Whittaker (Harmstorf) and his two helpers (dangerous assassins disguised as bounty-hunters)  kidnap Helen while escaping from the Union Army. California kills the two helpers and pretends to want to form an alliance with Rope. He is able to get Rope to lead him to the place where he is hiding Helen, then kills him and frees Helen.

REVEREND’S COLT
Director and cast:
Directed in 1970 by León Klimovsky. Starring Guy Madison, Richard Harrison, Germán Cobos, Perla Cristal, Ennio Girolami, José Canalejas, Nino Marchetti, Maria Martin, Marta Monterrey, Steven Tedd, Mariano Vidal Molina
Plot:
Troubled by the random death of a child during a shootout, the bounty-hunter Miller Colt (Madison) decides to change his life. He becomes a Protestant Pastor and arrives in the city of Tuckson with the intention of building a church, but the townspeople don’t believe in the authenticity of his conversion. He is accused of robbing a bank, but is able to prove his innocence. During a siege on a caravan of pioneers by a gang of criminals, he shows everyone how heroic and selfless he is. By now the ex-gunfighter has become known as “Reverend Colt” and he is finally able to open his church and be a spiritual guide for the local community. 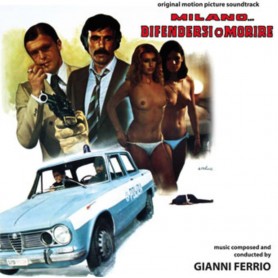