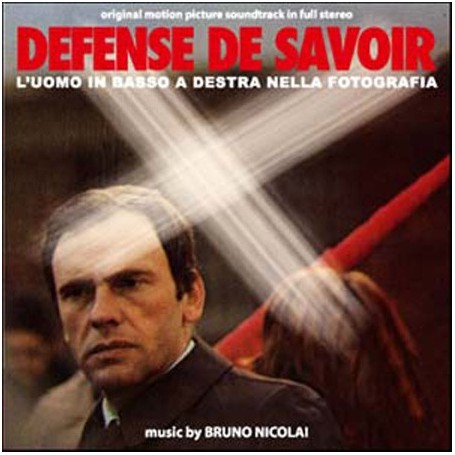 Digitmovies is happy to release as ninth volume of the series 'Bruno Nicolai in Giallo the complete OST in full stereo of "Défense de savoir" (aka "L'uomo a destra in basso nella fotografia" – "Forbidden to know") directed in 1973 by Nadine Trintignant and starring Jean-Louis Trintignant, Michel Bouquet, Charles Denner, Juliet Berto,Bernadette Lafont, Pierre Santini, Carlo De Mejo, Barbara Laage, Marie Trintignant. In France, on the eve of new elections, the young lawyer Jean-Pierre Laubray (Jean-Louis Trintignant) is convinced of the innocence of Simone (Bernadette Lafont), who has been suspected of the murder of her husband Jean Ravier (Charles Denner), a supervisor of the manifests for the electoral campaign of Paul Cristiani (Michel Bouquet). He then begins to investigate the dirty political environment, at first hindered and then helped by Juliette (Juliet Berto), the daughter of the politician. The truth comes to light: During a furious fight Bruno, the eccentric son of the politician, had killed a young man and subsequently tried to assassinate Ravier who wanted to denounce him. Ravier managed to save himself by shooting Cristiani's son, whose father then planned to flame the body in a simulated car accident. But fate decided that during the escape after a robbery Ravier was casually killed by a little girl which the man had kidnapped to cover his run. Because of the delicate electoral period, Cristiani masks the truth by providing the media "his" truth, but one which remains rather credible. At the end, the lawyer Laubray has been defeated and the love of Juliette will comfort his great discouragement for the suffered defeat. For "Défense de savoir", which uses some typical elements of the Giallo and the Noir mixed with those of the chaotic and intriguing political environment, Bruno Nicolai has managed to represent in music the whole atmosphere of mystery and terror in which the young lawyer finds himself in his desperate search for the truth. In 1973 C.A.M. had released an album in France (CAM LAG 460.007) which containied 12 tracks in stereo (40: 00) and which was then reissued in 1992 for the first time on CD (C.A.M. CSE 074) in Italy. Thanks to the friends of C.A.M. we could use the original session recording master tapes which have been kept in perfect condition and in full stereo. In addition to the album tracks, they have allowed us to discover half an hour of unreleased music. This OST is undoubtedly one of the better works of Bruno Nicolai for the genre Giallo and Noir. Our CD (total length 70:28) opens with a nostalgic and agonizing love theme (Theme de Juliette) for harpsichord and strings (Tr.1), the version of the Main Titles with bassoon accompaniment (Tr.13) is then re-used in Tr.15, Tr.18, Tr.20, Tr.24. This motif alternates with mysterious and dramatic music (Tr.5, Tr.6, Tr.7, Tr.8, Tr.9), with another more rhythmic theme (Tr.2, Tr.10, Tr.14, Tr.17, Tr.21, Tr.23) and with a classical Pop theme (Tr.11, Tr.16, Tr.19, Tr.22) typical of the Nicolai style.