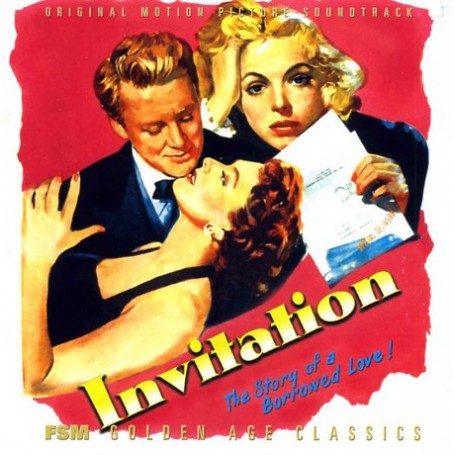 INVITATION / A LIFE OF HER OWN

Bronislau Kaper was a composer of classic film songs as well as film scores—"Lili," "On Green Dolphin Street" and "All God's Chillun Have Rhythm" are among his most famous works. One of his loveliest melodies he actually used in two "women's pictures": first in A Life of Her Own (1950), then in Invitation (1952), presumably because the first film did not perform well and the theme was too good to let it go to waste. This CD features the complete score to Invitation (plus source music), followed by the surviving tracks to A Life of Her Own.

Invitation starred Dorothy Maguire as a married woman who discovers that her perfect husband (Van Johnson) might have been "purchased" for her by her overprotective father, and that she might have a fatal illness. Kaper's "Theme From Invitation" dominates the score as a haunting expression of Maguire's anxiety, love and heartbreak, but the soundtrack also features beautiful, transparent writing for her family life, and dark currents for her obsessive search for the truth.

A Life of Her Own starred Lana Turner as a New York City model embroiled in an affair with a married man (Ray Milland). Although directed by George Cukor, it soon disappeared from theaters—spurring Kaper to reuse his theme later. The surviving tracks consist mostly of source music, along with a few cues of Kaper's dramatic score, similar to Invitation and interpolating the gorgeous melody as a recurring source cue for piano.

Many cues from Invitation are presented in rudimentary stereo, due to the prominent use of piano which was recorded on its own channel; the balance of the CD is in mono.

At last, one of cinema's loveliest melodies—which became a veritable "standard" of popular music—is fully documented in this premiere FSM CD.