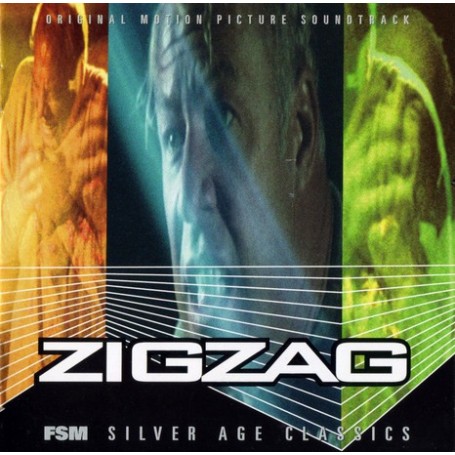 FSM returns to the heart of the Silver Age of film music—the early 1970s—with this 2CD set of M-G-M scores by Oliver Nelson and Jerry Fielding.

Oliver Nelson (1932-1975) was best-known for his television music ( The Six Million Dollar Man) and superlative arrangements for other musicians (Alfie, Last Tango in Paris). One of the few African American composers to break through on mainstream Hollywood projects, he was a gifted musician beloved for his penchant for melody and pleasurable orchestrations.

Zigzag (1970), a mystery-thriller starring George Kennedy, was one of Nelson's few feature scores, for which he provided a pair of evocative themes and jazz-based undercurrents. Disc one of this album features the previously unreleased original soundtrack (with action cues anticipating The Six Million Dollar Man) plus the LP re-recording (featuring vocalists Roy Orbison and Bobby Hatfield).

Jerry Fielding (1922-1980) is best-known for his work for Sam Peckinpah, but scored dozens of projects in the 1970s, with a complex, intricate style that was perfect for the decade.

The Super Cops (1974), directed by Gordon Parks (Shaft), was based on a true story about a pair of low-level cops who took it upon themselves to clean up a dangerous area of New York City. Fielding provided an amusing, energetic kaleidoscope of moods and styles: anxious, comedic, reflective, and action-packed, with funky source cues and a cheeky, militaristic main title—it's Jerry Fielding meets Shaft.

To fill out the running times, this 2CD set adds a bevy of bonus cues: Disc two includes Fielding's three episode scores for the 1973 TV series Hawkins, interpolating Jerry Goldsmith's theme for the pilot (FSMCD Vol. 6, No. 13); plus unreleased Fielding source cues from The Outfit (1973, otherwise released as FSMCD Vol. 5, No. 8). Disc one adds jazz standard source cues from Zigzag and The Outfit recorded by legendary singer Anita O'Day. Liner notes are by Lukas Kendall. Both discs are in excellent stereo sound.