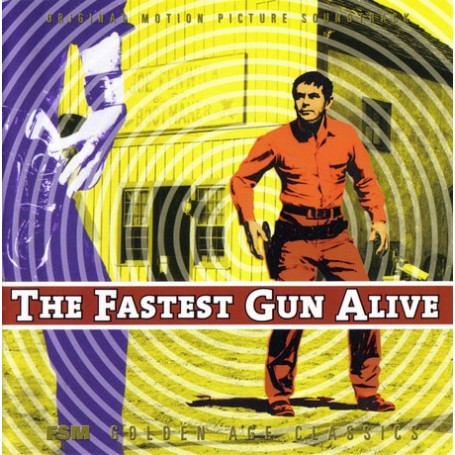 André Previn is regarded as one of the world's preeminent conductors, a respected composer of orchestral works, chamber music and opera, and an accomplished pianist. Yet in an earlier time he was also a talented jazz musician, popular recording artist, songwriter and—during a glorious two-decade span—one of the most gifted composers of film music Hollywood has known. His most famous scores from this period include Bad Day at Black Rock (1955), Elmer Gantry (1960), The Four Horsemen of the Apocalypse (1962) and Inside Daisy Clover (1965). Yet there are a number of now-obscure pictures for which Previn provided arresting music, including The Fastest Gun Alive (1956) and House of Numbers (1957), both directed by Russell Rouse when Previn was under contract at M-G-M.

A psychological western starring Glenn Ford, The Fastest Gun Alive tells the story of a mild-mannered storekeeper in the town of Cross Creek who harbors a dark secret: he is an expert sharpshooter but refrains from informing his friends and neighbors for fear that he will become a target for thrillseeking gunfighters. Circumstances conspire to put his abilities with a gun—and the principles of the citizens of Cross Creek—to the test. André Previn's score is dominated by a main theme that suggests both Ford's personal turmoil as well as his eventual nobility and heroism, but also includes a touching love theme, quintessentially American string writing and gripping music for a trio of criminals led by Broderick Crawford.

House of Numbers is a jailbreak film like no other: Jack Palance plays both convicted murdered Arnie Judlow and his gentle brother Bill, who actually breaks into San Quentin Prison in a complicated scheme that results in Arnie's escape. The implausibility of the storyline provided Andre Previn an opportunity to compose a score that is at times gloriously over-the-top: his main theme captures the violent temper of Arnie Judlow and the recklessness of the plan to extricate him from prison, while a secondary theme attaches itself to Arnie's wife, Ruth (Barbara Lang), and Bill's unspoken feelings for her. Two lengthy sequences are played without dialogue and Previn's inventive scoring, featuring constantly varied orchestral colors, produces an aura of genuine tension.

These two film scores offer examples of the distinctive, often exhilarating, music being produced by a young man with plenty of experience and an abundance of talent—a Hollywood veteran still two years shy of his 30th birthday. This CD features the premiere release for each score, both complete and in the best possible monaural sound (as they were recorded). Liner notes are by Jeff Eldridge.