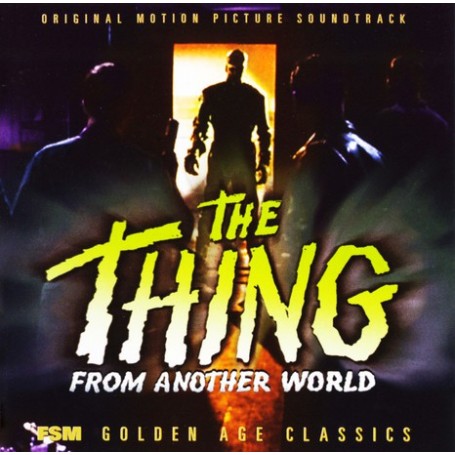 THE THING FROM ANOTHER WORLD / TAKE THE HIGH GROUND

FSM begins its eighth year of classic soundtrack albums with one of the most famous science fiction scores of all time: Dimtri Tiomkin's The Thing From Another World (1951), which astoundingly has never been released in its original soundtrack form.

The Thing From Another World was produced by Howard Hawks and bears his trademark creative stamp: a small group of researchers and military men recover a crashed flying saucer in the Arctic, out of which comes the Thing, an unstoppable alien bent on world domination. The film practically invented the archetypes of the genre: the unreasoning alien force that must be destroyed; the scientist who lets curiosity get in the way of action; the confined-space setting; and the fate of mankind resting on the shoulders of a few.

Scoring The Thing From Another World was Dimitri Tiomkin, one of cinema's most famous composers, who nonetheless was known for his popular melodies rather than an aptitude at science fiction. Tiomkin's roaring, bellicose score for The Thing featured unusual instrumentation—particularly the electronic theremin—that terrified audiences along with the film's titular villain. The score became the blueprint for the '50s "monster" movie genre, although Tiomkin never attempted another one like it.

Master tapes to The Thing From Another World are long lost, but the complete score survived on monaural acetate transfer disks in Tiomkin's personal collection, and that source has been used for this premiere CD. Some surface noise is present, but the sound is superior to our earlier release from acetates of On Dangerous Ground (1952). Two cues are even in rudimentary stereo, owing to the use of separate overlays.

The Thing From Another World is a short score (26:50), so this CD is filled out with Tiomkin's 1953 score to Take the High Ground!, a military-training film from M-G-M starring Richard Widmark and Karl Malden (running 51:47). Tiomkin's score is much more traditional than The Thing and features a rousing military march as a title song, as well as a love song ("Julie"). Take the High Ground! is presented largely in stereo, although the masters are a generation removed from typical releases of M-G-M films of this era.