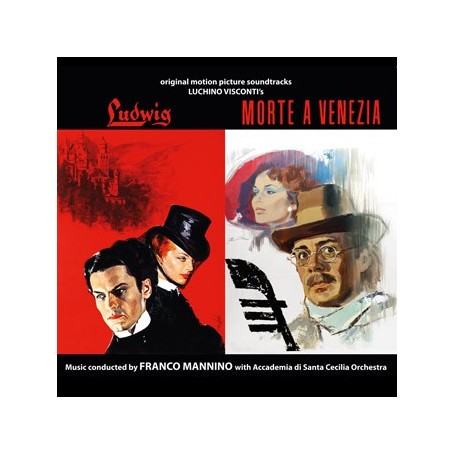 Plot:
The film tells the story of 19 year-old Ludwig Wittelsbach (played by Helmut Berger) who takes the throne of Bavaria in 1864 under the name Ludwig II.
The new King would like to popularize an interest in the arts and so he calls Richard Wagner to his court. But his Renaissance ideas are not seen well by his ministers. In the meantime Bavaria enters the Austro-Prussian war and Ludwig, who opposes the war, is forced to abandon the city because of conflicting behavior among his councilors. At the end of the war, Bavaria is annexed by Prussia. Ludwig finds comfort in his beautiful cousin Elisabeth (Schneider), who is the Emperor of Austria’s wife. In order to avoid a relationship with her cousin, Elisabeth tries to set him up with her sister Sophie (Petrona). After announcing his relationship, Ludwig backs out of marriage and seeks refuge in one of the castles he had built during his reign. Holnstein (Orsini), a subordinate of Bismark, is able to lock Ludwig away for mental illness. Ludwig’s lifeless body is found in a lake along with the doctor who was taking care of him.

Soundtrack:
For the film “Ludwig” Visconti chose a classic soundtrack, inserting classical music songs by Richard Wagner, Jacques Offenbach, Robert Schumann and Frank Mendelssohn. He also had the composer Franco Mannino create the transcriptions for the piano, orchestra and other instruments for some songs by the above-mentioned composers.

Franco Mannino (1924-2005) was an opera composer and orchestra director, creating adaptations from the most well-known classical music composers. As a soundtrack author, he won the David Di Donatello for the music from “The Innocent” by Visconti. He also did the music for “Ludwig,” “Death in Venice,” “Bellissima,” and “Conversation Piece.” His other soundtracks include “Woman of Rome” (“La Romana”) by Luigi Zampa, “Beatrice Cenci” by Lucio Fulci, “The Vampires” (or “Lust of the Vampires” in the UK) (“I Vampiri”) by Mario Bava and Riccardo Freda, and “The Driver’s Seat” (“Identikit”) by Giuseppe Patroni Griffi.

Plot:
The film takes place in 1911. In order to get over a heart attack, the composer Gustav von Aschenbach (Bogarde) moves to Lido di Venezia for a rest period. One day, at the hotel beach, he is smitten by a beautiful young Polish girl named Tadzio (Andrèsen) and falls in love with her. Gustav suffers an emotional crisis and is not able to decide whether to give in to this infatuation or to negate it. In his illusion to preserve his long gone youth, he decides to dye his hair and wear makeup to appear younger and more attractive to the young woman. A cholera epidemic erupts in Venice, but Gustav decides to remain on the beach in Lido until the end of his life, contemplating his love.

Soundtrack:
For the film “Death in Venice,” Visconti chose a classic type soundtrack, inserting pieces of classical music by Gustav Mahler, Modesto Mussorgsky, Ludwig van Beethoven and Armando Gil. He also had the composer Franco Mannino create the transcriptions for the piano, orchestra and other instruments for some songs by the above-mentioned composers.

Franco Mannino (1924-2005) was an opera composer and orchestra conductor who made adaptations of the most notable composers of classical music. As a soundtrack composer he won the David di Donatello award for the music from “The Innocent” (“L’innocente”) by Visconti. Together they also created the music for “Ludwig,” “Death in Venice,” “Bellissima,” and “Conversation Piece,” (“Gruppo di famiglia in un interno”). His other soundtracks include “Woman of Rome” (“La romana”) by Luigi Zampa, “Beatrice Cenci” by Lucio Fulci, “Lust of the Vampire” (“I vampiri”) by Mario Bava and Riccardo Freda, and “Identikit” by Giuseppe Patroni Griffi.