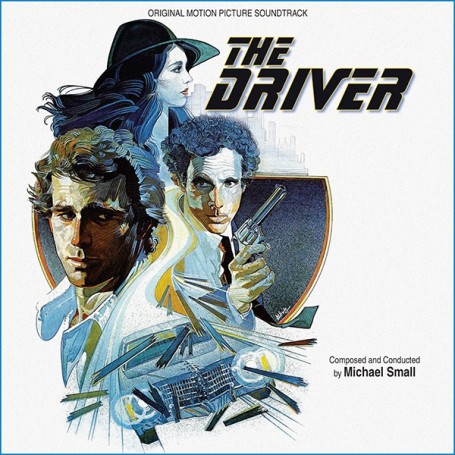 Michael Small began his film music journey in 1969. However, Small’s breakthrough film happened two years later when Alan Pakula hired him to score his first film as a director, Klute.The marriage of director and composer on Klute was absolute perfection and Small’s score was unique, original, and immediately put him in demand. From there, he went on to write incredible scores for some classic 1970s films, including Pakula’s Love and Pain and the Whole Damn Thing and The Parallax View, The Stepford Wives, Night Moves, The Drowning Pool, Marathon Man, and Audrey Rose, with each score unique, original, and filled with the Michael Small sound, which was unlike any other composer working back then. In the midst of all that wonderful work, he wrote three of his finest scores, and those are the three scores represented in this two-CD set: The Driver (1978), The Star Chamber (1983), and Black Widow (1987), for directors Walter Hill, Peter Hyams, and Bob Rafelson. They are a perfect neo-noir musical trilogy.

Black Widow is a terrific thriller starring Theresa Russell and Debra Winger. The acting is superb, the photography of Conrad Hall is amazing, as always, and the production design of Gene Callahan is stunning. Michael Small’s score is as entrancing, captivating, alluring, and dangerous as the Black Widow of the title. It has all the hallmarks of a classic Michael Small score and is one of his best.

The Star Chamber, directed by Peter Hyams and featuring a stellar cast, including Michael Douglas, Hal Holbrook, Yaphet Kotto, and Sharon Gless, became kind of a cult film thanks to cable TV and home video and is generally well thought of today. Once again, Michael Small provides a terrific score, beginning with its classic Small main title, majestic-yet-ominous, strings, woodwinds and piano doing an uneasy dance against a steady rhythmic pulse, a perfect beginning for the music and drama to follow.

Walter Hill’s The Driver is a quintessential 1970s movie – it looks, smells, feels and sounds like the 1970s. If anyone is unsure of this, the fact that Quentin Tarantino has referenced it in two films and thinks it’s one of the coolest movies ever made cements its reputation and is probably one of the key reasons the film has just been remade. The cast couldn’t be better – Ryan O’Neal as the The Driver, Bruce Dern as The Detective determined to catch “the cowboy who’s never been caught,” and beautiful Isabelle Adjani as The Player. And Michael Small as The Composer.

Small’s score for The Driver is, like the film, lean, cool, stylish and, yes, unique. Small uses electronics sparingly amidst the strings, reeds, and brass, and plays off The Detective’s line about The Driver being “the cowboy who’s never been caught,” with the use of a twangy country-western guitar that occasionally insinuates itself into the music.

All three scores were previously released by Intrada – Black Widow as a standalone and The Star Chamber and The Driver together on one CD. For this release, all three have been remastered by Mike Matessino, carefully removing numerous small dropouts and ticks and pops, most especially on The Driver. Black Widow and The Star Chamber are in stereo, while The Driver is in mono. With The Star Chamber and The Driver about to make their debut on Blu-ray, we thought the timing was perfect to make these three large Small scores available again in a two-CD value-for-money set. If you have never heard this music, you owe it to yourselves to grab this – there has never really been anyone quite like Michael Small.