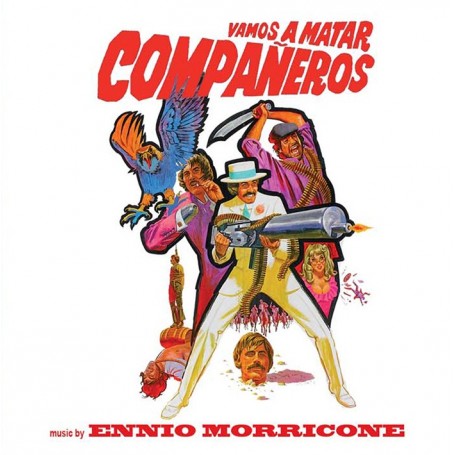 VAMOS A MATAR COMPANEROS (aka COMPANEROS) is a 1970 western movie co-produced by Atlantida Films s.a. (Madrid), Terra Filmkunst (Berlino), Tritone Filmindustria (Roma), directed by Sergio Corbucci and starring Franco Nero, Tomas Milian, Jack Palance, Fernando Rey, Iris Berben, José Bodalo, Eduardo Fajardo, Karin Schubert, Gerard Tichy, Gino Pernice, Claudio Scarchilli, Alvaro de Luna, Jesus Fernandez. This film along with TEPEPA , IL MERCENARIO and LA RESA DEI CONTI is part of the revolutionary Western genre. In the 1913 Mexico, during the Mexican Revolution , a peasant named El Vasco ( Milian ) starts a revolt in his home town by killing the army colonel in charge. The rebel leader and self- appointed General Mongo ( Bodalo ) soon arrives on the scene and takes on El Vasco in his revolutionary band . However, Mongo is more interested in earning fortune for himself and for his country. Yodlaf Peterson ( Nero ) , a Swedish mercenary arrives in Mexico to sell arms to General Mongo . The safe containing the money is locked and only Professor Xantos ( Rey ) knows the combination . Xantos is the leader of a counter revolution of students who opposes violence and is held in jail in the United States, where he was trying to fund the revolution, but he did not agree to give in exchange the monopoly of the oil wealth of his country. El Vasco despises the well dressed Peterson and calls him a penguin , but at the request of General Mongo , the two reluctantly join forces to capture Xantos . Their task is made more difficult by the U.S. Army and John ( Palance ) , an American with a wood hand who wanted to take revenge on Peterson, his former business partner . In fact the latter abandoned John dying after being crucified, and his trained falcon had to cut his right hand with his beak to save him. In order to maximize their own personal gain and to support rebel fighters Xantos , El Vasco and Peterson should betray Mongo . The two receive help from Lola ( Berben ) , the leader of the rebels linked to Xantos, with whom El Vasco falls in love. Eventually Peterson had to massacre the soldiers of General Mongo , who died riddled with bullets. Unfortunately, the safe proves to be empty . Peterson is preparing to return to Sweden abandoning Vasco and revolutionaries , when the terrible army sent to suppress the revolt arrives. The film ends with Peterson who goes to the office of the soldiers with rifle in hand, shouting: Companeros ! Vamos a matar , companeros . Ennio Morricone wrote a main theme for orchestra and choir ( the Cantori Moderni di Alessandroni ) who becomes a real battle hymn of the protagonists. The motifs is alternated with suspense and melancholic . Another protagonist of this wonderful OST is the late Franco De Gemini with his harmonica who was able to create thrilling passages that evoke all the epic side of the story . For this CD we used and digitally restored, to its possible best, the stereo master tapes of the original recording session.