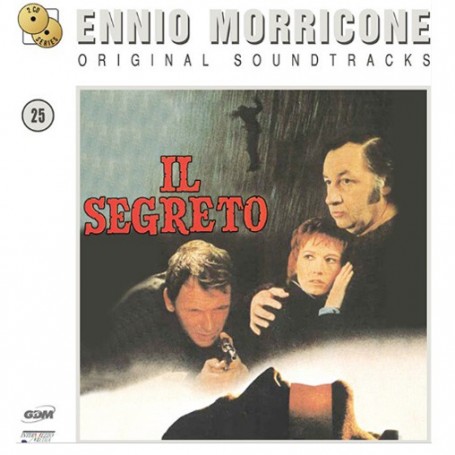 The original title for this French film is LE SECRET (1974). A mysterious thriller directed by Robert Enrico who did a good adaption of LE COMPAGNON INDÉSIRABLE, a horror novel with a very improbable plot by Francis Ryck. During his dark period, between TANTE ZITA (1968) and LE VIEUX FUSIL (1976), Robert Enrico made his worst films. He is however trying here to save himself, assisted by Philippe Noiret, but certainly not by the infuriating Marlène Jobert. Typical movie of the 70s, but with intelligently this movie starts with David Daguerre (Jean Louis Trintignant) who is tied on a bed in a prison cell and tortured by water drops falling on his head. The opening music starts with the sound of these water drops. Ennio Morricone, original as usual, used this as the foundation for the music. Then naturally the theme develops returning in various solutions. The second track, “Dal Mare”, is another masterpiece for piano and orchestra with the extraordinary voice of Edda Dell´Orso. These two tracks were originally issued on vinyl single in France (1974) and in Italy (1975). This was all the music released commercially until 1982, when the film ESPION LÈVE-TOI (Yves Boisset) came out and a soundtrack was released on LP with the track “Ombre Sospese”. This interesting dark and mysterious theme for cello, bass and piano is re-used music from track 4, “Nebulosa Prima”, from LE SECRET. The score is sometimes repetitive but never boring thanks to the different orchestrations by Ennio Morricone. In the year 2000 a complete soundtrack was finally released on cd going sold out within a few weeks. Now this is a remastered reissue with only 300 copies, a must have not only for Morricone fans.

The great Italian film director Valerio Zurlini has realized one of his most impressive films in 1976: IL DESERTO DEI TARTARI. A historical war drama based on the homonymous novel by Dino Buzzati. The young lieutenant Drogo (Jacques Perrin) is placed in a desert fortress where soldiers and officers are awaiting a possible attack of the Tartars. Years pass without the taking place of the feared or hoped attack, so the wait is their only raison for being there. Locations in Iran give an unreal atmosphere. In this two and a half hours film, international actors like Jean Louis Trintignant, Philippe Noiret, Vittorio Gassman, Max von Sydow and Giuliano Gemma entertain practically with the nothing happening. Valerio Zurlini directed the acting scenes while Christian de Chalonge has directed the fieldworks. Not much happens in the film,as already told there’s only waiting, and that’s really this making the movie interesting. During the opening credits, the films begins with lieutenant Drogo saying farewells to his mother and beloved ones and is leaving on his horse to his first assignment in the desert. Ennio Morricone wrote in his own style a sad solo piano theme, which is reminiscent of Chopin that makes it even sadder in the farewell scene. On the cd it is track 6, “La Casa e La Giovinezza” (home and youth). Alberto Pomeranz performs the piano piece. The cd starts with a track for organ performed by Giorgio Carnini with orchestra, creating the musical atmosphere of the movie. Again Morricone came up composing some interesting and original themes for this film, using the military trumpet as foundation. The score gives a fantastic musical feeling that underlines the desert and the boredom of the soldiers. Some tracks are harsh, however most of them are pleasing. There is even a gypsy dance in “La Cena degli Ufficiali”, tracks 12,17,19. Maestro Morricone gave us here another score with a wide variety of music. Like any soundtrack also this also gives us the music as a significant souvenir of the film, for those who have seen it.